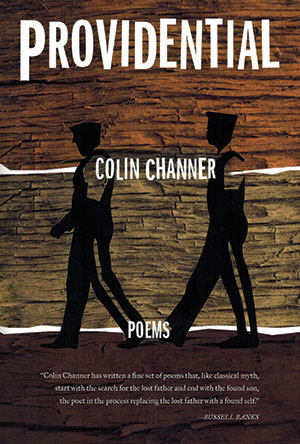 Born in Jamaica to a pharmacist mother and a policeman father, Colin Channer, an award-winning Caribbean diaspora writer in the US, has published a debut poetry collection exploring some of the often-violent complexities and confusions of colonial modernity. Channer recognizes that his home place is a land that “feels volcanic, / eruptive in the way of newish nations / built on old foundations of violence, / geographies where genocide and massacre / hang like smoke from coal fires, / mosquito nets.” Having had a policeman father (“employed by the landful against the landless”) also meant further exposure to violence—conditioned in large part by British colonialism—but the poet doesn’t merely turn his book into a chronicle of violence (although there are anecdotal poems about murder and rape); he turns it into a personal journey into areas of history and class, clans and nation, family and fatherhood.

Although Channer’s poetry (like Claude McKay’s Constab Ballads [1912]) is a significant work of what a critic has called “ethnographic modernism,” it is less traditional in its verse forms and confessional lyrics. Distinguished by a strong oral sense, it mixes Jamaican patois and American English, Rasta and reggae, also mixing voices in short and long forms as it progresses from the history and nature of the Jamaican police force to moving poems about “mounds of buried hurt” in Caribbean society, where people are caught in an ordained sociology of poverty, humiliation, and other indignities. Providential begins with Channer’s own father and how his days on the force affected his family and the very idea of fatherhood. It includes a retrospective vision (in New England) by the poet of his Jamaican childhood as well as a contemporary exploration of the challenges of trying to be a better father for his own teenage son, Makonnen. His penultimate poem, “Knowing We’ll Be Mostly Wrong,” concludes: “We begin to fail the second we invest in the speck / that makes the children. We do right, / knowing we’ll be mostly wrong.”

Although the collection sometimes reveals poems that seem unfinished or lacking in closure, it is an interesting volume that escapes the trap of colonial exoticism.