Life, Only Better by Anna Gavalda 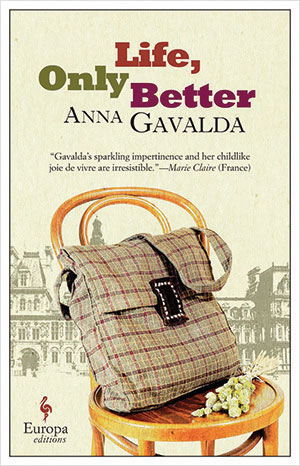 In her latest book, French novelist Anna Gavalda brings together two novellas exploring the young, restless, and downtrodden on the edge of a breakthrough. Matilde and Yann are both in their twenties, at a point in their lives when they feel opportunity is slipping past, for which they bear responsibility as much as their circumstances do. Both find their lives thrown completely off balance by chance encounters that force them to question what they want and how they will get it.

Matilde is drifting, working a dead-end job for her brother-in-law and living with more-or-less miserable roommates. Although not happy with her lot, she’s comfortable and complacent until her lost bag is found by a chef who leaves an indelible impression. Soon, consumed by the idea of this man, Matilde finds a new purpose in life as she tries to find him, putting all her hopes for a better, more fulfilling existence on him.

Yann isn’t much better off, living with his girlfriend in a flat that has slowly been scrubbed of his identity in favor of a neutral decor. One evening, while his girlfriend is out of town, he happens to bump into his neighbors, who invite him in for drinks and dinner. During hours of rousing conversation, Yann begins to see the passion missing from his own life and sets about making changes for himself.

Gavalda’s writing is engaging and lyrical although at times rambling in a way that’s true to the voice of her characters. She gives in to their impulses to self-pity and self-loathing—in the case of Matilde, to the point of distraction. But her characters are so deeply human that it’s easy to forgive any sense of misdirection. What’s more, despite being rooted in the now-cliché wayward twentysomething narrative, the stories themselves are entirely unpredictable. For Yann, the idyllic evening takes a surprising turn, while for Matilde, a single line takes the story to an unforeseeably dark and potentially dangerous place, only to abruptly end. Life, Only Better is indeed that: slices of life with the richness of experience turned up.