Outside the Margins: Literary Commentaries by Robert Bonazzi 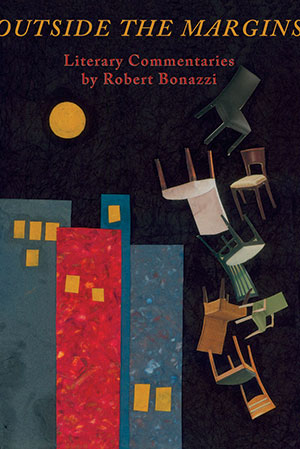 Outside the Margins: Literary Commentaries offers an in-depth look at the literature of international authors whose writings are “transformational art . . . capable of changing the world.” Author and critic Robert Bonazzi has chosen poets who have encountered diverse situations in life (political, social, cultural, etc.) and that have written about these issues from a marginal state, thus creating powerful works of literature that have “crossed real and stylistic borders.” The writers who form the collection of Outside the Margins could be considered migrants or emigrants who move within or outside their geographical boundaries, always reimagining new realities and spaces through their literature.

An independent translator, Bonazzi presents to an English-language audience the literary works of such world-renowned writers as Octavio Paz and César Vallejo, as well as Aziz Shihab and Vassar Miller because of their aesthetic and intellectual literary value. Bonazzi, an avid reader of world literature, has himself crossed borders of thought and consciousness because he calls the writers here “the most astonishing in the world.” His analytical commentaries are brief readings of what he calls a “fraternal dialogue” with truthful poetry, a poetry that challenges the reader through techniques of experimentation and the complex use of language.

One of the multiple virtues of the anthology is that it brings attention to the literature of the borderlands in the US Southwest, a literature that “negotiates between Anglo society and the Mexican community” in search of its own identity. A key component of this type of literature is that it bridges frontiers because writers and readers are continuously crossing over political, social, and cultural boundaries in search of a community of their own. Bonazzi comments that in “these narratives of otherness, we begin to hear the emerging chorus of genuine diversity.”

Outside the Margins: Literary Commentaries excels in its analytical commentaries because there are selections from a diverse group of writers that represent a unique style of writing and a rich thematic approach.