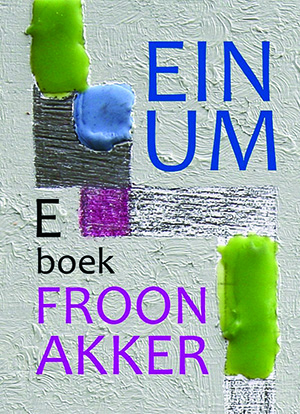 In 2010 Koos Tiemersma intimated that Under Water would be his last published novel. Fortunately, and to the delight of his appreciative readers, he changed his mind. Each of his novels has been distinctively different from the previous one, and Einum follows the pattern. In fact, it is more a collection of stories than a traditional novel, though all eighteen stories interconnect through place and persons. Remarkably, the whole is more than the sum of its parts.

The reader enters a nearly forgotten and mostly disregarded dump of a town, Einum, its neglected old dwellings ready to be razed. But by the time the reader exits and closes the book, the dilapidated neighborhood with its motley assortment of residents has memorably entered the mind and imagination as if the scenes and events had been projected on a screen. Here we have not just the life of a family but of eighteen individuals, connected closely or remotely but memorably rendered.

None of the main characters is forgettable. Not Walburg, the old widowed farmer who’s been deprived of sex too long and savors the chance to satisfy his lust. Not Lidy, the greedy conniver who offers sex to Walburg as a means of gaining his property. Not Casper, the pedophile who’s trying to escape his past and finally succeeds through suicide. Not Jente, the teenage birder who discovers the North American thrush that winged its way across lands and ocean all the way from Newfoundland to Einum, an event that suddenly thrusts forsaken Einum into the glaring spotlight of fellow birders and the media. Not Jan and Alie, the aging couple who can barely hold on, the burden of Alie’s dementia slowly but surely depleting Jan’s ability and will to take care of her.

These are among the Einum neighborhood residents whose interrelated stories weave together into the tapestry that provides the book with a unique reading experience. Unique not only because these simple, ordinary-seeming people come so vividly and multidimensionally alive but also because of the author’s decision to cast much of his prose in an unusual style of minimal punctuation. At first somewhat confusing, the reader quickly adjusts to the cascading thoughts and observations and details that flow into the verbal stream and carry the reader along toward a more participatory and intimate experience of character and action.

The book comes to a most satisfying expression in the poignant concluding story, where Jan, at Alie’s insistence, drives her to the water’s edge to meet that rare visitor from Newfoundland. He embraces and kisses her, as his internal battle rages. Then he lets her go, Alie striding in the dark toward the water. But she comes back; “she looks up at him and true heartedly says the little bird is gone Jan.”

The wondrous little thrush from a faraway land that anchored these stories has gone, but Einum lives on, for the reader has come to realize that its people are all around us. The author was awarded Friesland’s most prestigious literary honor for this book, the Gysbert Japicx Prize.