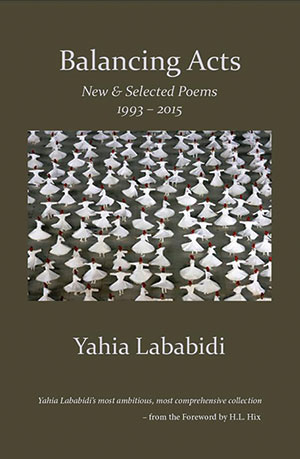 Mystical and modern, Yahia Lababidi’s Balancing Acts, a collection of poems spanning across a career of decades, tethers together a spectrum of concepts seemingly distant yet connected in a fashion nothing short of revelatory. For Lababidi, a notebook is as adequate an allegory for a Platonic parable as litter is to the overwhelming amount of “discarded people” throughout every civilization. It is often in Lababidi’s simplicity that his verses resonate, unveiling a mind as in tune with contemporary society as an ancient sage with the unscathed wild.

Perhaps most apparent when approaching Balancing Acts is the poet’s mastery of structure. Though many pieces adopt a straightforward form with few tangents, some of the most telling work comes in the form of brief, momentary blurbs like “Notebook” and “Recovering.” These instances are jarring, in one scenario encouraging one to deliberate over “silence” and “since” at both a literal and cosmic level.

Other entries do echo the influence of the poet’s birthplace of Egypt, though his work is not necessarily anchored in the region. Often, Lababidi transcends local musings for universal considerations as he deconstructs the nature of art as quickly as he wrestles with the classic vanity of a self-indulgent painter. Other selections carry an air of an anthem about them, like “What Is to Give Light.” Even this piece, however, resolves beyond the confines of a specific country, instead calling for an ideological spark to unite within all nations.

Yet it is Lababidi’s dissection of the mundane that is the binding agent of Balancing Acts. Walks in the park, donut shops, poolside people-watching all play a key role in the poet’s examination of life. With the ability to conjure essentially any image, Lababidi proves deriving revelations from normality to be a far more rewarding herculean endeavor. Moreover, this effect is not always created through metaphor but rather simple reflection.

Balancing Acts is comprehensive and accessible and only autobiographical when absolutely necessary. With it, Lababidi taps into the often-unconsidered power of the daily grind, contending that a morning commute or childlike daydream can parallel history’s most vaunted epics.