Made in Sweden: 25 Ideas That Created a Country by Elisabeth Åsbrink 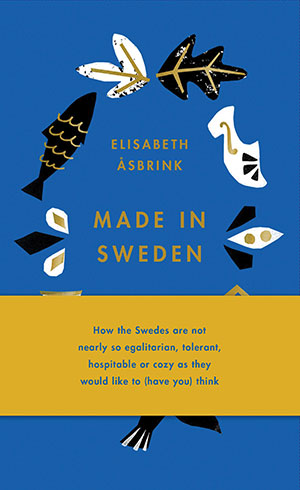 Made in Sweden is, Elisabeth Åsbrink tells us, an expression of conditional love: “I love this strange country in which I happen to be born. But my love isn’t blind. Here are twenty-five reasons why.” This, taken together with the slim format and whimsical cover image—a circle of objects that includes a clog, a fish, and an assortment of leaves—suggests a very personal take on the country and perhaps another Nordic exercise in national mock modesty. Remember the Danes and hygge? The Norwegians and chopping wood?

But no. That kind of thing is too facile for Åsbrink, a writer and investigative journalist who cares about serious analysis. Of her selected twenty-five “ideas,” some are admirable, but others very much not. A dark strand of bitter criticism runs through Made in Sweden. An article by Åsbrink  published last year (Guardian, May 14, 2019) refers to extreme right-wing trends, past and present: “Our historical narrative of goodness doesn’t deal with the country’s complicity with Nazi Germany.” Her conclusion: “The Swedish dream was always too good to be true. And now the far right is back.”

That historical complicity with the Nazis is shaming and suggests that more than a reasonable fear of invasion drove the widespread willingness to oblige. Again and again, national pride has fused with resentment of the Other, from other Nordic peoples to Russians, Jews, and current “refugees” from wherever, fueled by an assortment of unpleasant attitudes, most recently the rise and rise of a little-Sweden party, the Sweden Democrats.

Some of Åsbrink’s critics in Sweden are annoyed by all this negativity and miss her obvious affection for the place. Apart from the dear old “Swedish model”—a welfare state built on mutual financing—actual “ideas” are rare, but nice characteristics include respect for the rights of women and children and love of nature. Though some of the people are monsters, like the political scientist Rudolf Kjellén, “the man who inspired Hitler,” or the IKEA empire-builder and Nazi-sympathizer Ingvar Kamprad, most are definitely “good,” from Carl Linnaeus to Astrid Lindgren, the children’s champion, to Zlatan Ibrahimović, a go-it-alone individualist who “was simply Swedish before everyone else was.”

A Swede abroad, I might have loved this book for its nuanced, insightful account of the country. Or I might have hated its provocative insistence on some of the worst aspects of Swedishness—though some are missing, notably a past scandalous application of eugenic “principles.” But the very format—a small, cutely produced collection of interesting mini-essays—makes for mild enthusiasm rather than intense responses: a tasty geopolitical appetizer rather than a main course.