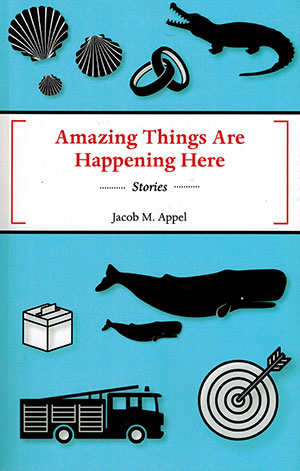 The title in Jacob Appel’s fifth collection of stories certainly echoes a thought Philip Roth articulated in the tumultuous 1960s: he worried that the rush of events might block writers of fiction. Reality was outstripping realistic fiction. Roth found his way out and so does Appel.

Actually, the amazing things in this collection are the human beings, the characters and the decisions they make. The woman who disappoints all expectations by declaring a former husband who abandoned her to be the man she’s waiting for; the wife who reluctantly agrees to allow her husband, afflicted with dementia, to “marry” a woman in the care center; the boy who decides on his career path when he puts his hand on the shoulder of a girl he worships, knowing she will die of leukemia.

These references might be considered spoilers, except such plot points are hardly the most interesting aspects of these stories. It’s how the characters change—their journey, not their destination. Some stories progress convincingly; some seem a bit constructed.

Arlene, the conflicted wife of the man who wants a second marriage in “The Bigamist’s Accomplice,” is quite a creation. A normal woman, still working, she is faced with her husband’s demand and appealed to by the husband of the woman involved. She is forced to consider the final separation his death will bring.

“Grappling,” a story out of “Old Florida,” is another feat of characterization, in spite of a plot that has all the marks of a tall tale. The basic situation is enough: hotel owner on an island decides to have an alligator-wrestling contest to boost clientele. After the contest is over his teenage daughter is attacked by an alligator that clamps on her foot. The winner of the earlier contest saves the girl, though she loses her foot. The winner leaves, and she declares she will marry no one else but the professional wrestler; her father finally offers a considerable amount of money if the man will show up and do that very thing.

A recently hired naturalist hears this story from the hotel bartender in the first two pages. So that’s not the plot. The naturalist laughs at the now-woman’s continuing obsession, then apologizes to her, then begins to court her—first as a challenge, then seriously. When the considerably scarred wrestler shows up to collect the bounty and the woman, the serious plot begins, at the same time retaining the sense of fate one associates with a tall tale.

Jacob Appel earns our respect through his commitment to characters, sometimes struggling to make sense of their lives, sometimes unexpectedly involved in situations that might happen when someone new enters what they thought was normal life. His style is straightforward, simple even, without being overly minimal or mannered. These stories will hold you.