Only as the Day Is Long: New and Selected Poems by Dorianne Laux 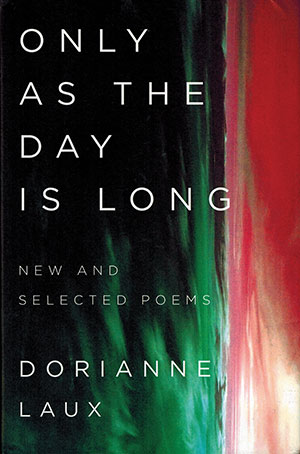 This newest collection by Dorianne Laux includes selections from her five previous books of poetry and thirty-two pages of new poetry, some of her best to date. As with any collection of selected poems spanning twenty-nine years, we are able to see more clearly (by way of the close juxtaposition of poems separated by decades) constants and metamorphoses in poetic style and content.

Laux’s work from the beginning has excelled by way of voice and imagery: a distinct and consistent voice from book to book delights with imagery that is vibrant, original, and vivid. These qualities of imagery shine in every poem, but nowhere more so than in her portraits, especially of celebrities that all of us can picture, such as Mick Jagger and Cher. We have the instant recognition of aptness that we experience, for example, in reading Rilke’s “Spanish Dancer.” Another constant is her recurrent subject matter: we find ourselves mostly preoccupied with sex, loss, death, and love—to wit, mostly universal human concerns considered through the lens of a particular experience related in a confessional style strongly influenced by Anne Sexton and Sharon Olds. This influence is most strongly noticed in poems about domestic violence, abuse, and sexual exultation. (As a side note, I might wonder if from some vantage point in the future our own time might seem oddly obsessed with sexual matters when two thousand preceding years of canonical poetry mostly doesn’t include it or does so discreetly.)

Laux’s poetry, then, is decidedly written in the grain of her poetic era, not across that grain. As such, we can sometimes feel as if we’ve read these poems before in some way: their strategies often fall within a kind of group free-verse style that almost always feels vaguely familiar by way of strategy and movement, the kind of consensus style we might surmise frequently in the high-profile glossy magazines of our time. There’s also a treatment of the line and rhythm that has too often been the group-style default setting of contemporary free verse for the last few decades—i.e., rhythms that are mostly prose rhythms and lines that are mostly determined by syntactical sense and visual approximation than by time and measured syllabic configurations (or even any other determination, for that matter).

In these ways, then, Laux’s poetry does not distinguish itself, except in those poems that rise above everything else she has written and astonish us with their achievement even within this received style. Such poems exist in this collection, enough to warrant a careful reading and maybe enough for her to emerge when all is done as one of the best in her group, the way a specific painter may have emerged as one of the best “Impressionists.” It’s too early to say, but I would urge readers not to miss two poems in particular, though there are others. First, “Antilamentations,” in her penultimate book, The Book of Men, begins by telling us to “regret nothing” and then proceeds to enumerate a whole concatenation of what could be considered personal inadequacies, insufficiencies of self or of behavior or effort or expectation, only to find forgiveness and acceptance in a poetic effort that is deeply persuasive and imagistically inventive. Another poem, “Lapse,” which is found among her new poems, is focused on the profane fact of the death of loved ones who cannot be summoned except in the still quietude of the mind. This poem is so beautifully written that it seems many of her other poems were all training for this one. Indeed, if this is any indication of what is still to come, we have some great poetry still ahead of us.

What strikes me in reading these poems chronologically is how the power of this poet’s imagination and apprehension of the unseen deepens as we proceed through to the end. Given the early life traumas, this poet’s sanguinity and earned joy are victories in themselves as well as poetic footprints that show that health can be reached in spite of pathology and that we can work our way through pain not just to survival but to ongoing flourishing.