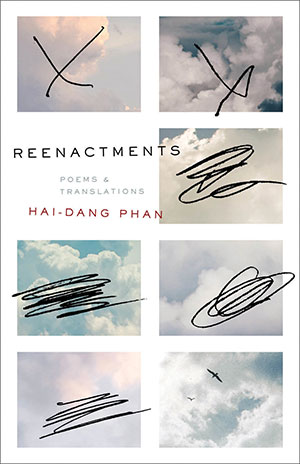 Historical reenactments have gained a burgeoning popularity recently. According to Jenny Thompson, author of War Games (2004), more than eight thousand historians, war enthusiasts, and adventure seekers gather annually to stage a historical battle. Although these re-creations can be surprisingly authentic, the stakes are never as high as they are for those portrayed in Hai-Dang Phan’s debut poetry collection, Reenactments (2019), who frequently confront, and are confronted by, reenactments of the Vietnam War. Phan, who also wears the hats of the translator and the literary critic, was born in Vietnam in 1980 and came to the United States as a refugee when he was almost two years old. For him, the war doesn’t need to be performed by makeshift actors. The war is still here.

Phan’s debut begins with the epigraph-warning “Maybe nothing ever happens once and is finished,” which is drawn from the seemingly unlikely source of William Faulkner’s Absalom, Absalom! (1936). It is an ambitious addition to Vietnam War literature and a fearless contribution to the small, albeit energetic, body of verse by the new generation of Vietnamese American refugees. His poems, somewhat like reenactors, don different garments and come in different sizes and forms—there is a ghazal, a haiku, prose poems, sequence poems, poems written in unrhymed couplets and triplets, translations of Vietnamese poems, poems that include the Vietnamese language, and poems with indented lines. While the urge to impress and show range is common in most debuts, what is uncommon in Reenactments is the level of control that is exercised. It whispers what it needs to say, not necessarily because it is afraid to scream but because it understands that screaming is not always the best way to communicate.

This is true even in heart-wrenching poems, like “Video Elegy,” where the poetic voice, which has the tenderness of a maternal lamentation, addresses a fallen soldier: “They sent you back / nicely packaged, / cleanly and precisely // converted / into VHS. Forever // I will mourn / the record of your face, / personally // and professionally.” These lines, like the lines of so many of Phan’s poems, are linguistically simple but emotionally complex. The fallen soldier is in some sense preserved by being “converted / into VHS,” but, concurrently, his humanity is lost in the way he is “packaged” and commodified. He comes back from the war only virtually; he is not buried in a grave but in the tapes that contain his last living moments.

Phan returns repeatedly to different visual representations of the war and of Vietnam in his collection, often to briefly have access to a time and place that are unfamiliar to him. In “Quiet Americans,” a family watches the Phillip Noyce–directed film that adapts Graham Greene’s novel The Quiet American, and they are “spellbound / by old Saigon flickering in the rear window.” Similarly, in “My Viet Cong,” there is an admission that “As a kid, I watched every single Vietnam War movie. / Apocalypse Now. The Deer Hunter. Full Metal Jacket. Platoon. // You name it. I was too young to realize I was after / my own face on the NVA soldiers and VC guerillas.” What’s striking in these moments is Phan’s ability to inquire into the complex psychology of refugees and ask important questions: How do images of the past affect the generation that has not participated in the events? What happens when this generation realizes, like the speaker in “My Viet Cong,” that these moving images are themselves fraught with historical inaccuracies, that “they shot the war in the Philippines” and that, ironically, “Vietnamese refugees were hired to act various roles, like VC”?

The answers are implicitly planted throughout the collection, like mines. That they are not thrown at the reader like grenades should not imply that the ironies of war escape the poet’s sharp eye. In fact, Phan is at war and at war with these ironies from the beginning of Reenactments. In “Small Wars,” he “pulled the pin on the smoke grenade, tossed it / under a tremendous wing, then slumped over my aircraft like a / limp ragdoll.” It is ambiguous whether this is a war zone, a reenactment, or, metaphorically, the imitative wars that survivors and their children often stage psychologically. In this ambiguity, there is also an indictment of a contemporary culture that monetizes the atrocities of war and treats wars, with real and painful consequences, as reenactments—plans them, assigns roles, decides on a flexible end date, and always has plans for the next ones. Aren’t we lucky to be indicted by a poet with a voice this strong?