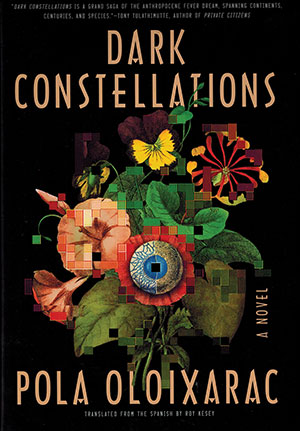 Dark Constellations is a slim novel that takes on large questions about evolution (both biological and technological) and interspecies hybridization. Stretching from the Canary Islands to Argentina and from 1882 to 2024, Argentine author Pola Oloixarac’s mind-bending story forges connections between a nineteenth-century plant biologist exploring the properties of a hallucinogenic plant and a twenty-first-century Argentine hacker, who uses his understanding of computer viruses to undermine a massive state-sponsored surveillance program.

Narrated in a detached way that seems at once mystical and scientific, this story about the transformations of terrestrial life and their consequences for humanity’s future jumps back and forth between the nineteenth and twenty-first centuries, inviting the reader to recognize time as a fluid dimension, fluid (according to this story) like the barriers between insects, plants, animals, and machines. Just as plant biologist and explorer Niklas Bruun discovers and experiments with Crissia pallida (and writes in his journals about “secret pacts between species”), so does hacker-genius Cassio Liberman Brandão da Silva explore the furthest reaches of the developing internet of the 1980s and ’90s to ultimately arrive at a hypothesis of viral mutations and human-machine interaction. When he teams up with co-worker Piera to develop a biological virus that can jump into and control machines (such as surveillance cameras), the reader can understand what Piera means when she thinks about “the biological cycle of technology” and its ecosystems.

But Dark Constellations is about more than hypotheses and experiments and theories about what unites disparate species. It is also about the history of political tensions between Brazil and Argentina, the stratification of classes in South America and the world at large, power dynamics between the sexes, the rise of techno-elites in major cities, and mass surveillance on a global scale. Indeed, this novel raises so many issues that, at times, it seems overwhelmed by them. Even one of these subjects could provide enough fodder for novels double the size, and that is what makes Dark Constellations at once fascinating and frustrating. It is most certainly ambitious but too short to address everything that the author brings up and attempts to tease out.

These burgeoning ideas, which make the novel a kind of verdant analog to its own subject matter, are rendered in beautiful English by Roy Kesey, whose translation reveals the complex layers of scientific, mystical, and technological vocabulary that Oloixarac so fearlessly wields. The author’s analytical approach to the similar vocabularies of biological and technological systems—her examination of how words like “penetration,” “viral,” and “exchange” commingle in certain contexts—make Dark Constellations a wonderfully bizarre mix of scientific treatise, hallucinogenic history, and cyberpunk thriller.