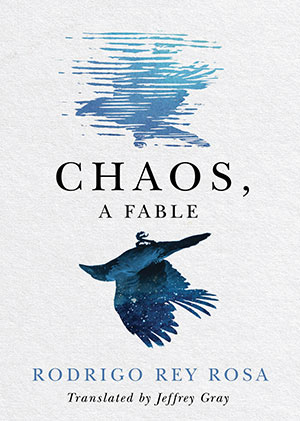 Rodrigo Rey Rosa might be the least well known of our greatest living writers. His books give us a cacophony of voices that, like the Sirens, tempt us away from known territories and onto strange and wonderful shores. His latest novel to be translated into English, Chaos: A Fable, pulls its reader into the dreamlike landscape of Tangier, Morocco, a place Rey Rosa knows well. The novel, translated by Jeffrey Gray, is an important, though brief, excursion in Rey Rosa’s oeuvre.

The basic premise of Chaos is simple: a Mexican writer named Rubirosa returns to Tangier after many years to attend a book fair. While there he seeks out an old artist friend, Mohammed, whom he hasn’t seen for thirty years. Mohammed is worried about one of his sons, who is in the United States trying to gain citizenship, and he asks Rubirosa to read the contents of a memory card that may offer clues about his son. The plot spirals from there.

However, it’s not so much the plot that captivates as the hall-of-mirrors-like narrative allusions. Characters resemble figures from Rey Rosa’s empirical life (it’s not accidental, of course, that the protagonist is named “Rubiorosa”), and the city of Tangier takes on its own dreamlike quality. When Mohammed is introduced to us in the beginning, it’s hard not to think of him as Mohammed Mrabet. Then there is the American artist John Field, who has lived in Tangier for half his life. Field could be a caricature for Rey Rosa’s mentor and friend, Paul Bowles. The problem is that both Mrabet and Bowles make appearances in the story, further complicating possible readings of the novel.

On the surface, this mash-up of the real and the imagined can be read as a game of intertextual dice-throwing, but in Rey Rosa’s narrative, it becomes a mechanism for witchcraft. Here everyone is not what they appear to be. In fact, they are all much more. The dreamlike quality of Chaos is linked to Rey Rosa’s life in the way that all fiction is linked to the life of the writer. But the danger is in the attempt to place an authoritative reading on the work, and this novel is careful not to demand that from its reader. Instead, we are left spinning in a world that both is and is not real, is and is not imagined. Rey Rosa’s true gift as a writer is to create magic from language, to create worlds that resemble the existence of numerous worlds simultaneously, in harmony and contradiction. This is perhaps most tellingly articulated by Mohammed in the very beginning of the novel when he states, “Time doesn’t exist anymore. . . . The world has gone mad.”

Chaos: A Fable may not be Rey Rosa’s most accomplished work, but it’s an important tributary off the deep river that constitutes the work of a master storyteller.