Pagan Light: Dreams of Freedom and Beauty in Capri by Jamie James 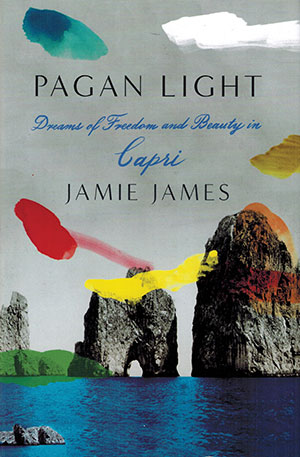 Pagan Light takes the reader to Capri, a small island just south of Naples, for a look at its history as an artistic and sexual refuge, where fact has bled into fiction. A quick portrayal of the island’s tenure as the seat of power for Roman emperor Tiberius during the first century CE opens the narrative, complete with the conflicting accounts of the emperor’s sexual extravagancies, but most of the book centers on the nineteenth and early twentieth centuries, as Capri became home to American and European expatriate artists and writers.

Jamie James displays his depth of knowledge as he connects the interweaving lives of a plethora of these figures. Baron Jacques d’Adelswärd-Fersen and Romaine Brooks serve as the primary biographical figures—the former to a slightly greater extent than the latter—which helps steer the narrative away from its tendency toward a who’s who of Victorian- and Edwardian-era creatives. As such, although a familiarity with the period in America or Europe will help calibrate the reader, much like a familiarity with the beginning of the Roman Empire grounds the reader in that section, the central narrative provides enough stability and rich detail to earn admiration from all.

For as knowledgable as James is of the biographies and as interesting and cohesive as he makes them, his language choices occasionally leave more to be desired. Alluding to Voltaire’s critiques, James describes the accounts of Tacitus as “adept at withering abuse but deficient in facts” yet calls those opposed “just as likely to be faulty as the salacious slander,” acknowledging a universal limitation on objectivity. In such fashion, purple prose slips into his own writing from time to time, whether in hyperbolic adjectives like “ridiculous” and “pathetic” or phrases such as “bitchy dig” that come with sexist connotations. While not overwhelming, the scattering of such language can’t help but temporarily take the reader out of the narrative and reduce the author’s credibility as a historical commentator.

That said, James handles the discussion of the island’s role as a queer haven with a more careful hand, and he presents this aspect without oversexualization or an excessive flair for the dramatic. It retains a matter-of-fact nature, which is welcome.

The book winds to a close by bringing the reader up to the present day, and it leaves off on a contemplative note. Is Capri on a new trajectory for the twenty-first century? Perhaps, James suggests, but if it is, it will still be filled with the echoes of the past, which continue to give fame and notoriety to an otherwise insignificant break in the sea.