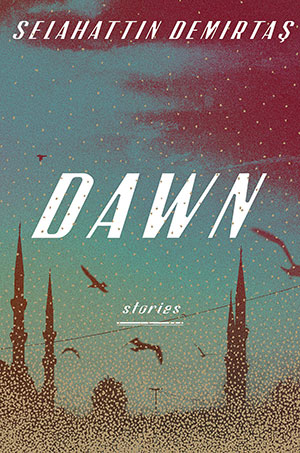 The revolution will be made into art. Selahattin Demirtaş is writing literature for its power to transform people and nations from within. He asserts that political action is incomplete without intellectual and creative development.

Demirtaş is the former co-chair of Turkey’s national pro-Kurdish HDP (People’s Democratic Party). He ran for president from behind bars in Turkey’s last national elections in June 2018. He also wrote a collection of short fiction. Dawn is his literary debut. He penned its twelve stories while in a maximum-security, F-type prison in Edirne, where he has been held since November 4, 2016.

Maureen Freely, who has translated Orhan Pamuk, wrote the foreword to Dawn from London last November. She irons out some of the details of the political context and marvels at his faith in humanity, his persistence as an agent of the human spirit. The name Seher in Turkish translates as “dawn” or, more exactly, the peculiar emanation of twilight just before sunrise.

Amy Marie Spangler translated the twelve collected stories with Kate Ferguson. In the last year, Dawn went on to win the Montluc Resistance and Liberty Award. It was shortlisted for the Prix Médicis in France and has sold rights to fourteen foreign-language publishers including Aram, which prints in Kurmanji Kurdish. The Swedish parliamentarian Thomas Hammarberg recently nominated Demirtaş for the 2019 Nobel Peace Prize.

The concepts of peace, democracy, and human rights scream out of the subtext and leap from his stories. Dawn is a work of political fiction, but it is not overly dogmatic. Demirtaş’s characters border on textbook liberal stereotypes and archetypal social roles that might risk flat narratives, but he is a talented storyteller in the tradition of his Zaza roots.

“This book is a collection of stories about everyday people, written by a politician fighting for freedom and equality, after being unjustly imprisoned by an authoritarian regime. It contains short fragments from my own past, which have resurfaced in my memory while I’ve been here in prison,” Demirtaş wrote to preface Dawn.

The solitude of jail has not impeded his resolve to participate in social change. The first story in Dawn is titled “The Man Inside.” It reflects the cold, hard reality that grounds people who endure life in maximum-security prison. His unadorned prose has a black humor, of a man left to his own devices, with nothing but the ephemera of his mind.

The second story is the title piece, “Seher,” a female name common across the Middle East. The story of Seher is that of an honor killing. Its unspeakable tragedy is delivered with pithy sentences, like that of a witness on the stand. “One evening in a forest, three men robbed Seher of her dreams,” wrote Demirtaş. “One night in an empty field, three men robbed Seher of her life.” These are likely some of the most potent lines in all of translated contemporary literature.