The Fox and Dr. Shimamura by Christine Wunnicke 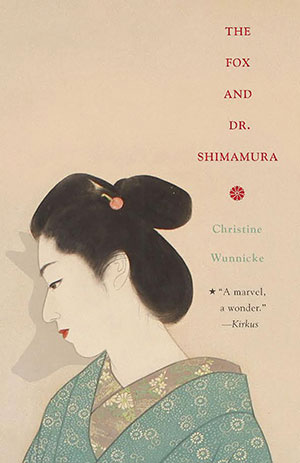 The Fox and Dr. Shimamura feels like a miniature voyage around the world and into the not-so-distant past. We travel with Dr. Shimamura from the rural Japanese provinces to the great European cities at the end of the nineteenth century. Thanks to Christine Wunnicke’s minutely detailed writing, eloquently reflected in Philip Boehm’s translation from the German, the atmosphere of the book envelops you and takes you along on this strange journey.

The novel starts almost at the end of the story. Dr. Shimamura is living out his retirement in a house he shares with four women: his wife, her mother, his own mother, and a maid, about whom nobody quite remembers whether she once worked at Dr. Shimamura’s psychiatric hospital or was his patient there. This uncertainty and forgetting forms the background music to this mystical tale.

Dr. Shimamura wants to remember the circumstances surrounding an event early on in his career when he was sent to the countryside to exorcise the mythical fox illness in “hysterical” women. During this assignment his young assistant went missing, presumed dead. However, over time Dr. Shimamura’s memory has been tampered with and altered: through his mother writing his biography, which he reads in secret; through his wife surreptitiously replacing his hidden souvenirs when they become worn from too much handling; and even through the therapy and hypnosis treatment he received from psychiatric colleagues when in Europe. Without being able to rely on his memory, he cannot discover what became of his young assistant, but ultimately this desire to know what happened gives him a reason to live despite his ill health.

Wunnicke’s deftly drawn vignettes of Dr. Shimamura’s life provide tantalizing glimpses into the manifestations of Eastern and Western psychiatry at the turn of the last century as well as a mystery that is slowly revealed throughout this short but moreish book.

Wunnicke has won several awards in her native Germany. The Fox and Dr. Shimamura was longlisted for the Deutscher Buchpreis in 2015. Philip Boehm is a celebrated German- and Polish-to-English translator.