The Republic by Joost de Vries 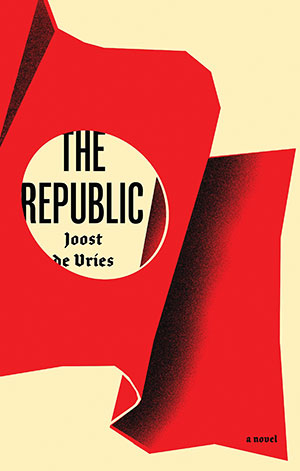 In his wry but uneven second novel, Joost de Vries kills off his most interesting character almost immediately. Josip Brik—famed historian and “generalissimo” to a would-be “junta of colleagues”—tumbles to his death from a hotel window in Amsterdam. Nobody’s sure if the scholar of Nazi Germany jumped or was pushed. With a cast of treacherous academics and rumors of a pilfered Third Reich relic, The Republic has all the makings of a canny, if derivative, intellectual thriller.

De Vries, however, is a comic novelist with metafictional inclinations. Mainly, he’s interested in exploring what it means to work within a milieu—in this case, the world of university publishing—that places a premium on developing new narratives. Why do humans build reductive tales out of discrete, often unrelated events? The travails of his protagonist, a Brik disciple named Friso de Vos, might help us arrive at an answer.

The editor of a journal of Hitler-related scholarship, de Vos falls ill during a work trip. When he wakes up in a hospital, he learns of Brik’s death. Another Brik devotee, Philip de Vries (note that he shares the author’s last name), has stepped in and delivered a glowing eulogy. De Vos is crestfallen—he was supposed to be the one “giving Brik’s death meaning” by “fitting it into a story.” Eager to reinstall himself atop the Brikian hierarchy, he resolves to impersonate—and thereby humiliate—his rival. His increasingly reckless antics will draw the attention of Nazi artifact-fetishists and far-right politicos.

De Vries’s tone is droll, nonchalant. The Dutch writer’s depiction of a punch-up at an academic conference is funny, but he has an unaccountable weakness for sight gags. One chapter includes images of inanimate objects that resemble Hitler, giving it the feel of a forgettable internet meme. Though de Vries’s plot is competently assembled, his narrative games are distracting. Many novelists have named characters after themselves, but his reasons for doing so remain obscure. His decision to import fictional professors from elsewhere—Jack Gladney, a Hitler scholar from Don DeLillo’s superb White Noise, makes several appearances—only reminds the reader of better books.

Eyeing a snowy city square in Austria, de Vos notes that it’s “as white as an unwritten Word document,” ready to be filled with stories. There’s a promising yarn at the heart of The Republic, but it’s burdened by a glut of gimmicks.