“Muslim”: A Novel by Zahia Rahmani 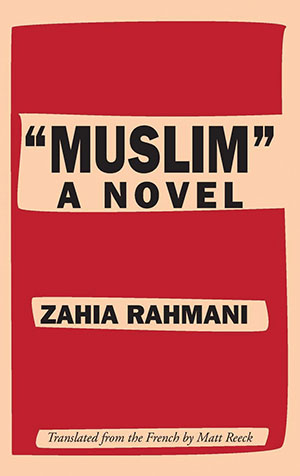 The Algerian-born francophone writer Zahia Rahmani’s experimental prose poses a seemingly simple yet complex question: What does it mean to be a migrant of Muslim origin in the West? A timely meditation on immigration, prejudice, and social categorization, “Muslim” interrogates the historical, religious, and political baggage behind Muslim identity.

Originally published in French in 2005, “Muslim” is the latest text to be translated into English in a trilogy that traces the narrator Rahman-Elohim’s rites of passage as the daughter of a harki, a Muslim Algerian soldier who supported French Algeria during the Algerian War of Independence.

At the heart of the story is an unrelenting desire to return to origins. The quest to return “home,” Rahmani shows, is arduous, painful, and at times heartbreaking. It necessitates a conscious effort to deconstruct oppressive ideologies and “all the labels that clung to us like crabgrass to the earth . . . Arabs, immigrants, exiles, Muslim.” The protagonist’s poignant reflection on the events that lead to her confinement in a desert jail reveals the intellectual, emotional, and spiritual challenges of liberating her identity from the traps of essentialism. Despite its lugubrious tone, an air of optimism pervades the novel as the first-person narrative voice moves back and forth in time between Rahman-Elohim’s present-day imprisonment and her warm childhood memories.

Rahmani interweaves Algeria’s layered colonial history and the predicament of displaced harkis in France, transforming the sociopolitical topology of French Algeria into a cultural memory that the protagonist seeks to recover. She exquisitely blends autofiction and oral tradition to foreshadow Rahman-Eloise’s exploration of the link between past, present, and future. Her writing is swift, provocative, yet poetic. The genre-bending prose further showcases Rahmani’s eloquence in the art of storytelling. She adds a dash of magical realism to her otherwise serious narrative, weaving together myths from the Quran and Kabyle folktales and fairy tales passed down orally through generations. The antiphony between the oral and written elements serves as a tool through which Rahman-Elohim reclaims her native language, Tamazigh, simultaneously divesting the terms “Muslim,” “immigrant,” “harki,” of their salient, pejorative connotations.