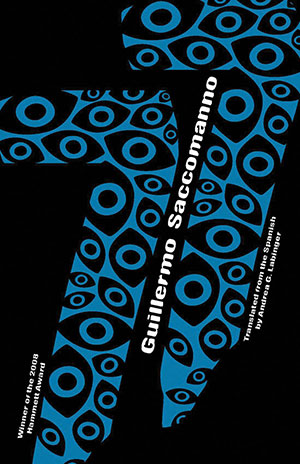 When one thinks of Argentine literature, particularly contemporary literature, Guillermo Saccomanno (b. 1948, Buenos Aires) does not come immediately to mind. One need not look as far back as Borges, Cortázar, Ocampo, or Bioy Casares, all of whom lived, wrote, and died in the twentieth century, to find writers—Ricardo Piglia, Juan José Saer, and César Aira—who are familiar to English readers. Even much younger authors, Samanta Schweblin and Martín Felipe Castagnet, for example, are more recognizable, if for no other reason than their presence on the Bogotá39 list. Hopefully, with the release of 77, Saccomanno’s relative obscurity will quickly fade.

The fifth of Saccomanno’s nine novels, 77 is only the second to be translated, following Gesell Dome, which was also translated by Andrea Labinger for Open Letter. In addition to Argentina’s Premio Nacional de Literatura, Saccomanno is also the recipient of the Premio Biblioteca Breve for El oficinista (The party-liner) and a two-time recipient of the Hammett Prize from the International Association of Crime Writers, for 77 and Gesell Dome.

“The way I tell this story may be terrifying, Professor Gómez begins. And he adds: How can you narrate terror?” And so begins 77, a novel ostensibly about one of the darkest periods of Argentine history, the so-called Dirty War, waged by the military dictatorship of Jorge Rafael Videla against anyone who challenged the dictatorship’s social, political, and religious order. “A terrorist,” Videla wrote, “is not just someone with a revolver or a bomb, but also whoever spreads ideas contrary to Western, Christian civilization.” Between 1976 and 1983, from fifteen thousand to thirty thousand Argentine citizens, including secondary and university students, were forcibly disappeared, tortured, and murdered. 77, then, is named for the year 1977, during which the events take place and which many consider to be the most brutal year of the Dirty War.

Structurally, 77 is arranged in four parts: a prologue, parts 1 and 2, and an epilogue. The epilogue, which takes place in the present, functions to establish the novel’s flashback structure, introducing readers to Gómez, a gay man in his eighties, who taught high school literature during the dictatorship. “I’m an old man who repeats himself. I’m over eighty. And I have nothing to lose anymore except my papers. But papers, like words, blow away in the wind,” he tells us. Words, it seems, the act of telling, cannot compensate for his former silence, which he considers a form of complicity during that fateful year that saw the arrest and disappearance of his favorite student, Esteban.

Earlier, I said that 77 is ostensibly a novel about Argentina’s Dirty War; it is also a book about reconciling inaction with survival. To survive, Gómez remains silent in the face of brutality and resorts to sex to cope with his lack of courage, including with a straight cop with ties to the dictatorship’s campaign of terror. Ultimately, however, 77 is about healing the wounds of the past. “We struggle to find the exact words to explain what hurts us most,” Gómez tells us, “as if by naming them our suffering might diminish. In our urgency to name it, we’re distracted from pain.”

At times, Saccomanno’s telegraphic prose doesn’t come through in the English. In sentences like “Era un muchacho más que flaco, espigado,” which Labinger renders as “He was beyond skinny; he looked emaciated,” the addition of “he was,” absent in the original, changes the cadence of Saccomanno’s syntax. Elsewhere, one wonders why words like cagazo (from cagar, the Spanish verb for “to shit,” suggesting something is so frightening as to cause one to crap one’s pants) and mishiadura, a Lunfardism that is etymologically related to “misery,” were reduced to mere “fear” and “poverty.” These, of course, to some may be little more than cavils.

On her website, Labinger asks, “For what is translation after all but a kind of eavesdropping?” In translation, just as in eavesdropping, things may be added and omitted without affecting the outcome. This translator, then, is convinced that Labinger has heard Saccomanno’s voice clearly and, in doing so, has done an admirable job of translating this gripping novel.