Minutes of Glory and Other Stories by Ngũgĩ wa Thiong’o 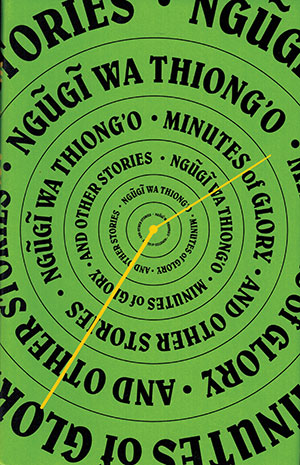 While few writers hold their fingers against the pulse of postcolonialism, Ngũgĩ wa Thiong’o has charted its very heartbeat. Quickly ascending to the forefront of African literature throughout the late twentieth century, novels such as A Grain of Wheat and Petals of Blood solidified Ngũgĩ’s prominence. Yet in the background of his lengthy prose grew just as rich a mastery of brief fiction. With Minutes of Glory and Other Stories, Ngũgĩ assembles the quintessential collection of short stories spanning the length of his literary career.

Just as the scope of Ngũgĩ’s craft encompasses a myriad of Kenyan culture, so too does this anthology channel an equally broad spectrum of emotions and ideas. Divided into four major movements, Minutes of Glory includes the nearly sixty-year-old short story “The Fig Tree” alongside the much more recent “The Ghost of Michael Jackson.” Such a wide gamut likewise offers a biographical peek into Ngũgĩ’s career previously unavailable through his novels, albeit not entirely assembled chronologically.The first two overarching subjects of the collection are also its most permeating as Ngũgĩ wrestles with trials of family and faith. “The Village Priest” details the titular priest’s struggle to conjure rain and maintain his spirituality against a far more prolific rainmaker. Throughout his text, traditional practice rallies against Western influence seeking to assimilate if not render the bulk of Kenya vestigial. At the heart of each tale pulses the rhythm of an individual as Ngũgĩ finds the agency to prevail against any social influence. Even so, and such is the case with “The Black Bird” and “Goodbye Africa,” Ngũgĩ acknowledges the quest for agency is often tragic.

Though the collection’s third part also contain its eponymous story, the preceding movement, “Fighters and Martyrs,” carries the most weight. Minutes of Glory’s final three pieces seem almost auxiliary, as if to only give one a better sense of Ngũgĩ’s musings in retrospect. This aside is not inappropriate but would have perhaps been better woven into the text’s earlier works.

Structural weaknesses aside, Minutes of Glory is still a necessary staple of Kenyan literature. Ultimately, the text offers an insight deeper into Ngũgĩ himself than any other form of his prose possibly can.