The Memory Police by Yoko Ogawa 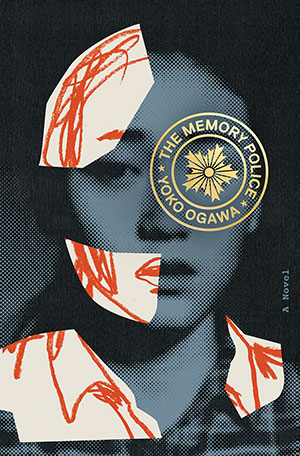 We are on an island. No inhabitant knows its size, its shape, or where it is. About fifteen years earlier, things started vanishing: the narrator begins, “I sometimes wonder what was disappeared first—among all the things that have vanished from the island.”

Things that are disappeared may be all objects of a type—emeralds, say—or entire categories—birds, say. Disappeared objects don’t literally vanish; rather, they lose all meaning in the mind. A disappearance is not limited to cognition: when perfume was disappeared, “the ability to smell the perfume . . . faded, along with all memory of what it meant.”

Any residue of a disappearance must be destroyed. “If it’s a physical object that has been disappeared, we gather the remnants up to burn or bury or toss in the river. . . . Soon things are back to normal, as though nothing has happened, and no one can even recall what it was that disappeared.”

Meanwhile, man-made structures are deteriorating, victims of neglect and entropic decay. At one point snow begins to fall and does not stop. Gradually, distinctions between objects, the stuff of meaning, are obliterated by the white and the quiet. Thus does landscape externalize processes underway in the narrator’s psyche. But no matter what is disappeared, the islanders adapt quietly and without complaint, for they fear the Memory Police.

Distinguishable only by indecipherable geometric badges, the Memory Police wear “dark green uniforms, with heavy belts and black boots . . . leather gloves [with] guns half-hidden in holsters at their hips.” They can enter any dwelling, arrest anyone, search anywhere without warning or justification. Terrifyingly efficient, they work “in silence, their eyes fixed, making no unnecessary movements.” Their primary duty is to enforce disappearances by obliterating anything and anyone connected to what has been disappeared.

Although the Memory Police could become the stuff of cheap Orwellian horror, Ogawa avoids this trap by consistently presenting them with a calm, chilling understatement that repeatedly catches us off guard. Here as throughout the novel, Ogawa’s imagery is empowered by the beauty and simplicity of her prose, which, in this elegant translation by Stephen Snyder, evokes a mood of elegiac sadness that blankets the twists and turns of the story and lingers long after the novel ends in inevitable dissolution.

Ogawa has written over twenty books and won several major awards: notably the Akutagawa Prize (1990) and the Shirley Jackson Award (2000). Only four have been previously published in English, all sensitively translated by Snyder. They are nothing if not diverse. The Housekeeper and the Professor (2003; 2008) is a charming domestic story about number theory. Hotel Iris (1996; 2010) tells of a sadomasochistic affair between a teenage girl and a grieving widower. The Diving Pool (1990; 2008) is a triptych of novellas about painfully isolated women driven by their inability to connect with others to casual cruelty and even sadism, while Revenge (1990; 2013) is a mosaic novel: eleven obliquely linked stories that share a common setting and some recurring characters and motifs. What unites these works are a fascination with violence and the grotesque; a willingness to plunge readers into a surreal hyperreality, and Ogawa’s style: always restrained, even calm, no matter how grotesque the material.

Ogawa offers no explanations for the inexplicable “laws of the island.” None are needed. For she is using the machineries of The Memory Police to vivify a philosophical inquiry into the nature of self, the role of memory in its construction, and its inevitable dissolution as age erodes, denatures, and eventually destroys memories. The richness of characterization, the subtly poetic imagery, and the strangely compelling nature of the leisurely plot make The Memory Police singularly unforgettable.