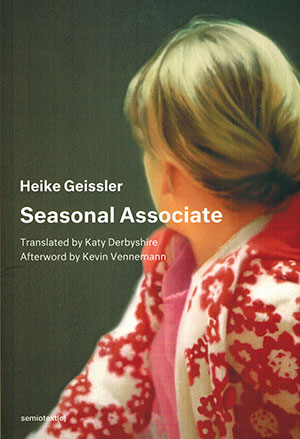 Heike Geissler would like to be “a person who is what she does,” but her writing and translating work pays too little to buy the occasional extras for her two sons and her boyfriend. She therefore took the seasonal (Christmas) job that she describes here at an Amazon fulfillment center in Leipzig, where she spends her days unpacking, scanning, and stacking things. This is the epitome of alienation, the complete anti-thesis to her aspirations.

This alienation is particularly salient to her, as a German from a country that no longer exists, because the GDR’s ideals, though never remotely realized, still resonate in her. But at Amazon, “fulfillment” is for everyone else; the customers’ satisfaction is all that matters; “associates” are totally subservient to that Amazon goal. Coming to work here has, however, also allowed her to realize that others with jobs here like hers, unlike the managers, have no other alternative; they’ve been sent by the employment office while she has at least come on her own. These are mostly women, and, on top of the hard and tedious work, they’re forced to endure pervasive sexism. On one hand, for example, Geissler’s male supervisor tells her she would look better without those thick glasses; on the other hand, the trainers tell the women not to wear anything that would cause the men to drop things.

Amazon apparently claims to have a flat hierarchy (typical oxymoronic corporate-speak), with just managers and workers, and it’s simple: workers just have to do what managers tell them. (There are company spies, of course, who make sure no one tries to sneak anything out.) And as these “Ossis” (East Germans) seem endlessly needing to be told, and read everywhere, the problem is not the job or the work, it’s the worker; it’s you. All you need to do is to finally adapt yourself to the needs of the job. Quit just thinking about yourself! It’s all about the Amazon customer.

Geissler makes this alienation palpable, in a way that very much engages the reader, by alternating a first-person narrator with a second-person one, the “I” of the writer telling the story of a “you,” the person working for Amazon: “While you’re working . . . tired and hungry . . . I’m sitting in a café . . . with a friend drinking white wine spritzers.” The gulf between these two personae has been caught perfectly in Katy Derbyshire’s vivid translation. To enjoy it yourself, you know where to get the book instantly! (Geissler shops at Amazon only for things she cannot find anywhere else.)