Dogs and Others by Biljana Jovanović 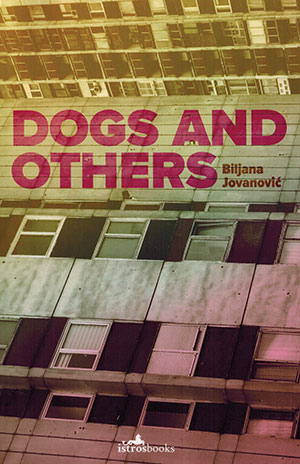 A cult figure when Dogs appeared in Serbia in 1980, dead at forty-three in 1996, Biljana Jovanović today commands widespread respect. Yet Dogs constitutes her first work to be published whole in English. The dysfunctional family in this first-person faux memoir reflects Jovanović’s Yugoslavia, a society in existential crisis, caught between East and West, tradition and postmodernity, unity and ethnonationalism—an unstable, dog-eat-dog world governed by patriarchy, power, lust, and greed.

Dogs’ meandering plot traces the quest of its lesbian protagonist Lidia to “disconnect” from the “mutual family narrative” that paints her a selfish ingrate, her brother Danilo a crybaby loser. Lidia lives in Zemun (greater Belgrade) with Danilo and their elderly grandmother, Jaglika. The siblings’ mother, Marina, has fled with a newish husband to Milan. The plot arc includes Jaglika’s aging and death, Danilo’s deterioration and suicide, and Marina’s increasingly naked cruelty.

Comprising twenty-eight chapters (some titled, some with obscure epigraphs and arcane attributions), Lidia’s graphic stream of consciousness intertwines past with present through dreams, digressions, and occasional “Pictures” or “Stories” of “Childhood.” Realism laced with dark humor depicts castration and decapitation, emotional and physical abuse, bodily excretions, and damaged people, evoking a world of exploitation and deceit. Lidia’s sarcasm punctures duplicity, lyricism reserved only for her lover Milena, whose skin “glowed in all directions . . . and took my breath away.” Parenthetical phrases amplify, negate, challenge, and mock, as when Lidia traces the family story: “(Jaglika the creator—her memories go back the furthest; Marina the great magus; Danilo and I, the assistants . . .).”

Here “dogs” of various kinds (“sick,” “vengeful,” “pathetic,” etc.) wield sex for power. Lidia’s boss and Danilo’s doctor rape her; she becomes Milena’s “slave.” An anonymous letter writer mourns men’s loss of power. Marina must have a man in her thrall. Adored by Lidia and Danilo, raped by her dentist, Milena seduces a mentally challenged patient and revels in the siblings’ worship before abandoning them.

The specter of suicide haunts Lidia and Danilo. Marina and Jaglika etched on the young bastards’ psyches details of their father’s gruesome self-murder, which alternate with images of Tsvetaeva’s final act as Lidia has sex with Milena. Lydia urges Danilo to love, but his “feelings of abandonment” lead to suicide. In Belgrade for her son’s funeral, having only wired money for Jaglika’s, Marina, “all done up,” husband in tow, blames Lidia for Danilo’s end, one answer to a tormented existence.

Dogs withholds closure. Rejecting Marina’s hate-filled words and “stupid identity games,” Lidia may or may not transcend her past. But she, at least, confronts hard truths. Yugoslavia refused—and committed suicide.