Mouthful of Birds by Samanta Schweblin 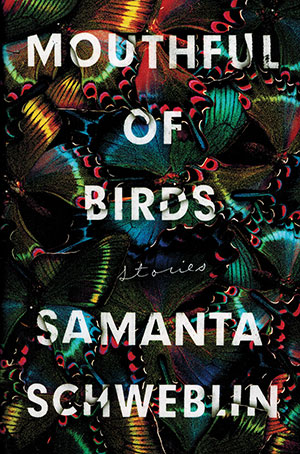 Following up on her 2014 novel Fever Dream (nominated for the 2017 International Man Booker Prize), Samanta Schweblin’s collection of short stories, Mouthful of Birds, takes readers on a road trip full of surprising and surreal pit stops, populated with characters that hover on the edge of familiarity.

The minimalistic and uncanny stories contain enough of everyday life—french fries, ailing parents, exact change—to make the incursions of strange figures like a merman, or a teenager who eats only live birds, seem acceptable, even plausible. Often compared to her compatriots Julio Cortázar and Jorge Luis Borges, Schweblin does share their mastery of short fiction. Her eerie, not-quite-right settings, however, hearken to contemporaries like Mario Bellatín and Haruki Murakami.

The title story, “A Mouthful of Birds,” explores a father’s fascination with his inability to relate to the new habits of his pubescent daughter, which include dining exclusively on live sparrows that her mother delivers in shoeboxes. The symbols of blood and milk that point to looming womanhood in that story reappear in the collection, which make gender difference and parent-child relations seem alien and therefore questionable.

Other stories play with Tolstoy’s famed trope of a stranger coming to town. In some cases, as in the collection’s opening story, “Headlights,” newlyweds at a rest stop discover they are part of a tradition of abandonment and suffering; in “Irman,” the narrator discovers the inexplicable violence of their traveling companion at a lonely roadside diner.

In “Olingiris,” about two women who meet in their rather inexplicable line of work, one of them remembers how, as a child, “[s]he wrote a poem about fish, but invented fish. She wrote about what she felt sometimes in the morning, when she was just waking up and sometimes didn’t fully know who she was or where. About the things that made her happy, about the things that didn’t, and about her father.”

Schweblin invites us to linger in that disoriented place between sleep and waking, in order to see what we accept as natural and permanent with new eyes and, perhaps, imagine another way.