Sweet Darusya: A Tale of Two Villages by Maria Matios 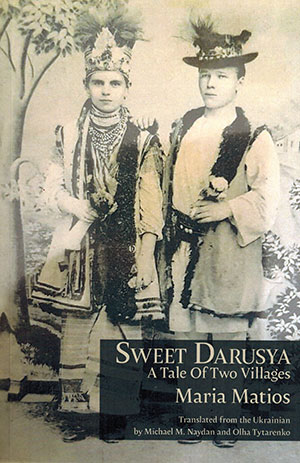 Maria Matios is an award-winning contemporary Ukrainian author, widely known for her authentic writing style. She is currently residing in Kyiv, the capital of Ukraine, and has also been active on the political scene there since 2012. Her best literary work is Sweet Darusya, written in the early 2000s.

Matios was born in the late 1950s in the Bukovyna region, Ukraine. The region was torn, invaded, and occupied by various nations for centuries; hence its rich history. The Bukovyna region is now a part of an independent Ukraine, scattered on the luscious slopes of the eastern Carpathian Mountains—a beautiful country deeply rooted in tradition, religion, and folklore.

Matios’s novel Sweet Darusya, initially published in Ukraine in 2003, has been read, studied, researched, and written about worldwide—mostly in academic circles. The question remains, however, why it took over a decade for its English translation to appear. In my opinion, not only the complexity of the text made it a daunting task for a skilled translator to undertake but also the challenge of communicating in another language a deeply seeded trauma of Ukraine and its people, masterfully portrayed by Matios.

A team of translators, Michael M. Naydan and Olha Tytarenko, undertook this momentous project, as each of them brought their own expertise to the table and turned it into a successful collaboration by blending translation styles and making specific translation choices that work best for the English-speaking reader.

I read Sweet Darusya multiple times: when it was first published in Ukraine, then a few years later, and most recently in its English translation. It is a powerful text on many levels: individual, familial, communal, societal, and national. It is a true family saga without a clearly outlined plot, showcasing a few storylines that overlap and tell a story through their own characters and events. At times, it feels that the novel develops on its own without a writer behind it.

Matios often draws from her own past and seamlessly incorporates history into her work, allowing her reader to relate to and engage with Ukraine’s past on an emotional level and therefore experience therapeutic healing.

One of the characters, for example, suffers from severe headaches, caused by a childhood trauma when she was ten years old, after which she lost her ability to speak. The triggers of her pain are known to her and to the community in which she lives. Her neighbors play a crucial role in nurturing her back to reality when her condition spikes—those scenes are truly vivid and visceral. She, however, finds comfort in nature, music, and love.

Matios skillfully raises the question of mental health and explores modern medicine when treating unprocessed trauma. It does not work and leaves the reader even closer to Ukraine’s past to be witnessed through the trauma of a young woman along with the other characters who drive the narrative. Matios also brings forward the importance of the father-daughter relationship and the feelings of loss, grief, and guilt and their impact on child development. The father figure appears often in one of her character’s dreams, who truly believes that he is real. She finds comfort in reminiscing about the days when her family was happy and not tormented by military actions.

Matios’s novel is a true herstory of Ukraine and of Sweet Darusya’s characters, who are in constant search of their authentic and compassionate selves.