Praise for the Women of the Family by Mahmoud Shukair 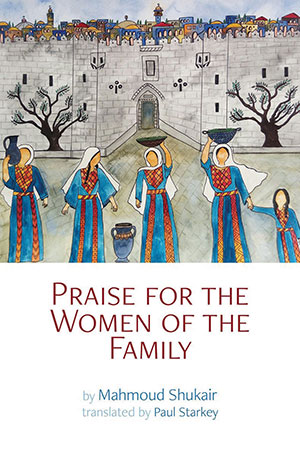 Praise for the Women of the Family is a character study of a Palestinian clan set after the 1967 war. Women in the novel are objects of reflection and vehicles for cultural change. Two of the patriarch’s sons, Falihan and Muhammad al-Asghar, narrate the story, with interjections from al-Asghar’s controlling mother, Wadha. Wadha, a repository of tradition, shames other women for infractions like donning a bathing suit at the beach. The environment is explicitly gendered and hierarchical in Wadha’s mind—the ocean is “a male that leads women astray” and “the fire was a female.” Meanwhile, Muhammad al-Asghar works in a divorce court, where he meets his future wife, Sanaa. He reflects on the changing societal attitude toward women’s clothing as Sanaa begins to wear pants in public.

Al-Asghar’s thoughtful sections contrast with Falihan’s defensiveness. A smuggler, Falihan is paralyzed from the waist down after being shot by the intended fiancé of his wife. His willingness to trade with the occupiers and pay family members cheap wages leaves Falihan wealthy but alienated. The family receives letters from a third son, ‘Atwan, who abandons his wife and child in Palestine to marry a woman in Brazil. Another son is imprisoned, and a fifth travels to Kuwait in search of employment, as the occupation has decimated job prospects for Palestinians unwilling to work for Israelis. The voices of these sons resonate with confusion and excitement as they process the disruption of tradition by leaving or staying, protesting or assimilating.

The novel’s moments of grief are striking. The occupation upended lives, and the reality of this loss is strongest in the details: “People abandoned their homes. . . . They left their bedrooms with the curtains lowered, and they departed, taking with them only a few belongings and an excess of memories.” The upheaval is accompanied by loosening strictures on the behavior of the clan’s sons and daughters. Al-Asghar refuses to marry again when Sanaa proves infertile. He disobeys his father’s wishes and quits his government job to pursue work as a writer.

The old ways and places are gone, and the inheritors of Palestine make new paths in the aftermath.