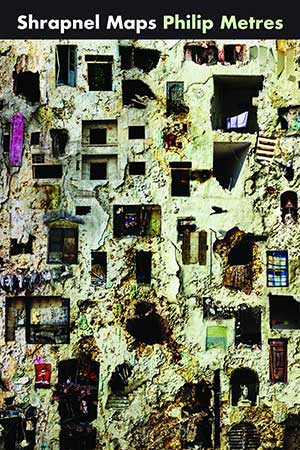 PHILIP METRES’S SHRAPNEL MAPS is an impressive work of listening, learning, and journeying into the trauma of others. The book is divided into ten sections and punctuated with images, posters, maps, and historical documents. The poems themselves are an arrangement of forms: erasure poems, simultaneous poems, monologue sonnets, persona poems, and dedications to survivors, friends, poets, witnesses, neighbors . . . the many others who guide the Arab American Philip Metres on his journey of documenting the intertwined Palestinian-Israeli history.

Trees that overreach and trespass their fences (“One Tree”), trumpet vines that creep, strangle, and menacingly wait for spring (“Like the Serpent in Eden Is the Trumpet Vines”), and a son’s organs planted in enemy bodies (“Ismail & Abla to Ahmed, Their Son”) are all metaphors for crossing sharp divides and embarking on agonizing roads toward healing. Metres writes through, against, and with history and weaves a narrative committed to neighborliness and kinship in shared pain.

Although written from a place of deep sympathy, this work remains that of an outsider, and perhaps this is where it acquires its accessibility to a wide audience but also its frustrating insistence on congruence. A long list of names in the acknowledgments page and a short afterword attest to the apprenticeship of unlearning Metres has entered at the hands of the many voices through which and against which he writes these poems. He places himself in difficult conversations, stands on the sharp dividing lines of conflict, consistently attempting a balancing act. His perspective is that of one who willingly chooses to “sit inside the stories of Israelis and Palestinians,” not one sentenced to this complex forest of history. Perhaps this is where his ability to hope for light at the end of history’s blind tunnel comes from.

He opens his collection with an epigraph from Israel’s national poet, Yehuda Amichai, countered by another from the voice of Palestine’s Mahmoud Darwish, and then goes on to tell the story of “Two people, one tree, not enough land or light or love.” For that story to be told and for it to have any chance at a resolution, some things have to be put aside, glossed over, and reimagined so that the two people have the same claim to the one tree and the same right to light and love in that land.

With my family divided on both sides of Lebanon’s southern border, I leave Shrapnel Maps disappointed, feeling that it is a story and a journey for someone else’s benefit, not mine. Nevertheless, I am certain that these poems will bring much enlightenment to an uninformed reader, an easy initiation into the Palestinian tragedy. When confronted with a neighbor who keeps high fences and whose children grow up “only around their own kind,” the Arab American in Metres’s collection thinks: “The Arab in me still wants to invite him in for tea. The American in me wants the Arab to turn and disappear in the falling snow.” Like this persona, we as Arab Americans are expected to contort the Arabs (and especially the Palestinian in us) into difficult spaces, package our trauma in palatable ways, translate our pain into the pain of others who are perceived as more valid or relatable.

Shrapnel Maps left me with burning questions Metres himself poses in his afterword: “What do we say to those who remain in the thickets of suffering? What do we do in this brief space of our breathing?” And for a people gagged and erased, oppressed and dehumanized for three generations now, a poem is sometimes “the only space for breathing.” It is a space that does not tolerate diplomacy or compromise. For it then risks two things: relinquishing itself as poetry and muffling the voices it sets out to champion.