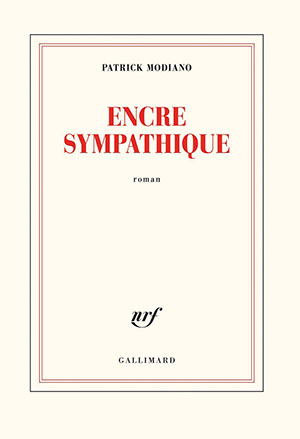 The narrator of Encre sympathique, Jean Eyben, recalls an episode from thirty years earlier, when he briefly worked for a detective agency and vainly attempted to find a missing young woman named Noëlle Lefebvre. For reasons left unexplained, the narrator has kept the case file for all these years, even though its disparate contents provide a very incomplete picture of who Noëlle Lefebvre was and why the detective agency had once sought to find her. Jean Eyben’s sporadic reminiscences of his fruitless investigation have been renewed by chance encounters, which lead him to recapitulate and revive his search for a character whose very existence he nevertheless comes to doubt, since it is delineated only by contradictory clues.

In what is decidedly not a conventional example of detective fiction, Modiano alludes to some of his previous novels. For instance, Jean Eyben’s boss at the agency is named Hutte, a character who was present in Rue des Boutiques Obscures (1978). Modiano also leads his readers to various apartment buildings and neighborhoods of Paris, some of which have been completely renovated, so that they no longer seem to bear any trace of the places where Noëlle Lefebvre may have lived or worked. Sometimes linked to what could be called his investigation, the narrator’s ambulations through Parisian streets and through his intermittent memories are not presented in any perceptible chronological sequence. As a result of Modiano’s fictional exploration of the passage of time, a map of Paris (or at least parts thereof) comes to resemble a palimpsest.

The last section of the novel is marked by a sudden shift from the narrator’s first-person narration to third-person narration. This section is also set in Rome, where, so says a woman who appears to once have been Noëlle Lefebvre, “nothing ever changes”—as opposed to the ever-changing French capital city. The novel’s conclusion leaves open the possibility of a resolution of the initial plotline, not to mention a belated relationship between the two main characters.

Modiano’s vast oeuvre (nearly thirty novels) remains centered on Paris and on its endless potential as a site of fleeting memories and vanished characters. Encre sympathique is one of his best recent novels.