The Clerk by Guillermo Saccomanno 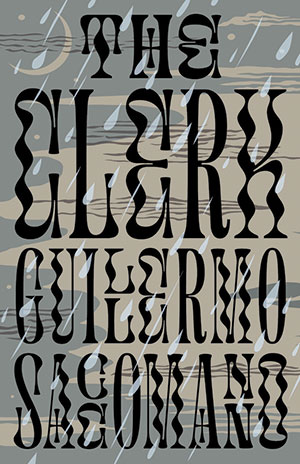 “AT THIS TIME of night, the armored helicopters fly over the city, the bats flutter against the office windows, and the rats scurry among the desks engulfed in darkness, all the desks but one, his, with the computer turned on, the only one that’s on at this hour.”

So begins Guillermo Saccomanno’s novel The Clerk,* a neo-noir tale that relates the bleak existence of an office worker debased by the drudge of an all-but-meaningless life in a city besieged by gangs, terrorists, and a militarized police presence.

Although many reviewers have labeled The Clerk a dystopic novel, rather than a dystopia brought on by war or climate change, which are tangential elements here, The Clerk offers us a dystopia of alienation and dehumanization triggered by late-stage capitalism-cum-neoliberalism, enforced by a hypermilitarized state. In this way, The Clerk could be set in Argentina in the 1970s, like the author’s earlier novel 77 (if not for the cell phones), or present-day Chile. Instead, The Clerk transpires in a nameless city, in a near future, of cloned dogs and cloned babies, surveillance helicopters, guerrilla attacks, and a virus, a city where the elderly die in nursing-home fires and students and teachers are massacred in school shootings. The parallels to the current day, especially to the United States, are striking. The appearance of the translation now is particularly timely.

Winner in 2010 of Seix Barral’s Biblioteca Breve Novel Prize (previous winners have been a who’s who of Hispanic literature, including Goytisolo, Vargas Llosa, Cabrera Infante, Puig, Fuentes, and Poniatowska), The Clerk is Saccomanno’s third novel (after Gesell Dome and 77) to be translated by Andrea G. Labinger and published by Open Letter. Structurally, the novel is made up of fifty-five short chapters—some less than a page long—which provide the reader voyeuristic glimpses into the protagonist’s dreary day-to-day life (“the dandruff and hair loss torment him”) against a backdrop of a city plagued by violence (“Two drug dealers on a motorcycle gun down a minister”). The novel narrates the life of a nameless protagonist (everything and everyone in The Clerk is nameless), a Kafkaesque clerk, as disillusioned by his job as his home, where he lives with his wife, “a sour, despotic sort,” known only as “the woman,” and his children, whom the narrator describes as “a litter of obese, ill-behaved brats” who “demand electronic devices, fashionable clothing, astronaut-style sneakers, a car, [and] vacations,” except, that is, for a sickly albino son known as “El Viejito,” for whom the clerk feels sympathy, in the same way he feels sympathy for his own pitiful existence. (Labinger’s decision to add the appositive phrase “the little old man” to explicate “El Viejito” seems out of place here. While a common strategy in literary translation, the translator should endeavor to explicate foreign words or phrases in a way that suggest the words from the author’s pen.)

Others have gone so far as to label The Clerk a misanthropic novel, but this categorization misses the mark. While it is true that the protagonist despises his life—his family and his job—he does not eschew human connection; on the contrary, he finds the only satisfaction and hope present in his life in an affair with a coworker, “the young woman,” who is also having an affair with their boss, “the Other,” a figure who serves as both antagonist and exemplar against which the clerk measures his life.

Stylistically, Saccomanno’s prose is telegraphic and repetitive. The short sentences, which at times provide nothing more than a subject and a verb (“She blinks, sighs”) and at others not even a verb (“Choppy, their conversation”), serve both to mirror and intensify the monotony of the protagonist’s life. Overall, Labinger’s translation deftly reflects the style, tone, and rhythm of Saccomanno’s prose. At times, however, it falls short. Consider the phrase la melenita castaña a lo garçon, which loses not only the original’s cadence but also its specificity in Labinger’s rendering: “the chestnut-colored hair in a boy cut.” The Spanish melenita, which is the diminutive of melena (mane, long hair) suggests the expression a media melena, which refers to bobbed hair. While the phrase a lo garçon does imply a boyish haircut, Saccomanno’s phrasing is more elegant.

At times, too, Labinger’s word choices create connotations that diverge from the meanings present in the original. Consider the use of “fool” for baboso. From the word baba, meaning “spittle” or “drool,” the noun baboso occupies a more colloquial, even pejorative, register. Consider, also, the use of lúgubre in this sentence, Los engrajes y su resonancia lúgubre, which Labinger renders as “The gears and their gloomy reverberation.” “Gloomy,” which is generally used to describe a space or emotion, is, at best, an infelicitous choice. In this sentence, Saccomanno uses the higher and more mellifluous lúgubre (mournful, lugubrious) to describe a sound that serves to reinforce the dronelike repetition of the protagonist’s life. Of interest, too, are Labinger’s multiple translations of the word patota, which appears, in both singular and plural forms, seven times, rendered variously as “gang members,” “kids,” “the crowd of kids,” and twice respectively as “the gang” and “the mob.” While patota is polysemic, the meaning seems to be consistent throughout the text. The shift between the anodyne “kids” and the more menacing “gangs” and “mobs” fails to capture the continuity of meaning present in the original. I offer these comments fully aware that each translator reads the text in their own way, and their word choices reflect that reading. My goal here is not to police Labinger’s translation but to point out the often subjective—and complex—nature of translation.

* In my review of Saccomanno’s earlier novel, 77, also in Andrea Labinger’s translation, I referenced this novel, which had not yet been translated, and provided a bracketed English translation (The party-liner), as is the custom for untranslated works. The problem is, I read oficinista (clerk) as oficialista (party-liner). I regret the error.