The Perfect Nine: The Epic of Gĩkũyũ and Mũmbi by Ngũgĩ wa Thiong’o 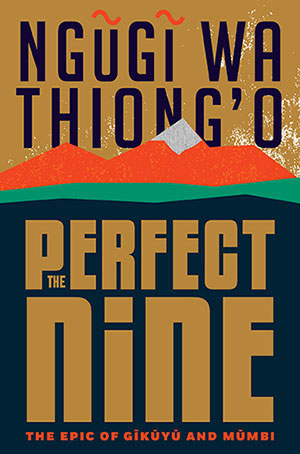 NGŨGĨ WA THIONG’O’S first venture into epic poetry is a triumph of the form, which resounds with the lyrical heartbeat of the Gĩkũyũ people in Kenya as Ngũgĩ chronicles their mythic history. An origin story told in flowing verse narration, The Perfect Nine: The Epic of Gĩkũyũ and Mũmbi tells the tale of the Perfect Nine—the ten daughters of Gĩkũyũ and Mũmbi—who become the mothers of the ten Gĩkũyũ clans. The epic recounts their parents’ efforts to find, from among ninety-nine suitors, the proper partner for each daughter. These efforts lead to a perilous, ogre-filled adventure to the Mountain of the Moon as the daughters and their potential husbands retrace Gĩkũyũ and Mũmbi’s original journey to Mũkũruweinĩ, their home. Ngũgĩ retells this epic story from a strongly feminist perspective, with the Perfect Nine being the heroines of their own legend.

Ngũgĩ composes a wisdom-dense narrative with a rhythm befitting the swirling motion of mythos: “Now is Now and it is not Now because Time does not stop. / Yesterday is Yesterday and it is not Yesterday because Time did not stop. / Tomorrow is Tomorrow and it is not Tomorrow because Time will not stop.” The pulsing cadence of Ngũgĩ’s writing imitates ripples on the surface of a pond—smooth undulations that carry the reader further and further, deeper and deeper into the story while never forgetting their point of origin in Kenyan mythic tradition. It is this rhythmic progression of the narrative that lends The Perfect Nine a certain dreamlike quality. The story feels both ancient and immediate as the chronicle drifts seamlessly between reverie and suspense. This simultaneous temporality reminds the reader of the history of the Gĩkũyũ people—recorded in ancient tales but still very much alive.

This history lives within every verse of the epic, as, along with the fantastical adventures of the Perfect Nine, Ngũgĩ’s epic poem records ancient Kenyan customary practices, such as those ceremonies surrounding a Gĩkũyũ wedding. In this way, The Perfect Nine not only immortalizes the myth of the ten daughters of Gĩkũyũ and Mũmbi but also acts as a document that preserves Gĩkũyũ cultural traditions and breathes a vibrant gust of passion and verve into Gĩkũyũ history.

Ngũgĩ crafts a beautiful retelling of the Gĩkũyũ myth that emphasizes the noble pursuit of beauty, the necessity of personal courage, the importance of filial piety, and a sense of the Giver Supreme—a being who represents divinity, and unity, across world religions. All these things coalesce into dynamic verse to make The Perfect Nine a story of miracles and perseverance; a chronicle of modernity and myth; a meditation on beginnings and endings; and a palimpsest of ancient and contemporary memory, as Ngũgĩ overlays the Perfect Nine’s feminine power onto the origin myth of the Gĩkũyũ people of Kenya in a moving rendition of the epic form.