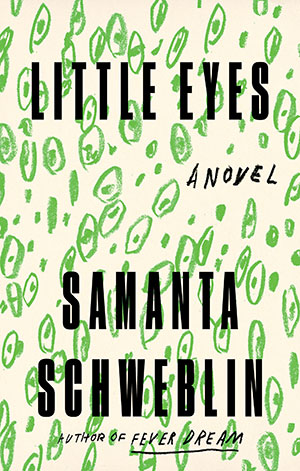 IF LITTLE EYES had been written fifteen years ago, it would have been a work of fiercely imaginative science fiction. But in the age of social media, cybercrime, and mass surveillance, the latest book from Argentine writer Samanta Schweblin feels far too believable, if not eerily familiar, to be called “futuristic” or “speculative” (or even, to an extent, fictional). In traditional sci-fi fashion, Little Eyes centers on a technological invention and its resounding effects throughout society. But think less androids and more electric sheep: Schweblin’s invention is the “kentuki,” a remote-controlled animal with wheels for feet and cameras for eyes, controlled by a random and anonymous user. It comes in different forms: bird, bear, rabbit, dragon; and its uses are many: household pet, silent companion, information thief, pervert (depending, of course, on who that user is). And all you need is $279 and an internet connection.

Little Eyes echoes the urgent, clarified style of Schweblin’s earlier works, helped by the return of Megan McDowell as translator. At just over 250 pages, the book is Schweblin’s longest work yet, although in tone it resembles her shorter fiction, reading more like a whorl of disparate stories than a traditional novel. Some of these stories come and go in the space of a few pages; others span a number of chapters, but even these only scud across the surfaces of the people and places they depict. For even if this is Schweblin’s longest work, the purview of the book is much broader, zooming from Oaxaca to Zagreb, from Hong Kong to the far north of Norway. Despite the power of the kentukis to connect people across the planet, however, none of these stories overlaps; indeed, all they share in common is the central presence of the eponymous “little eyes,” McDowell’s sinister synecdoche for the kentuki unit. (The original Spanish title is simply Kentukis.)

In most of the stories, the kentukis play the role of household pet, mute and powerless as domestic animals, but animated by the mind of an unknown human. In others, they become the components of an interactive art exhibition, announce the lottery on the news, or perform the role of a local prophet, answering questions by rolling onto scraps of paper labeled with possible responses. Schweblin explores many of the potentially endless scenarios involving these mysterious, ridiculous machines, and it is in the resulting panoply of power dynamics between human and kentuki that Little Eyes most merits our attention. For the relationship between “keeper” and “dweller” is anything but even. As the term suggests, the keeper owns their kentuki, and can do with it what they want; in one mock-horror scene, a character hangs her crow kentuki upside down, hacks off its wings, and then sets them aflame. But when these abuses do occur, it is often in retaliation against the psychological abuses of the dweller, and the obverse power of their impenetrability—to see without being seen, to know without being known. It is, as one character remarks, the difference between having and being.

Concision is Schweblin’s strength, and what she sacrifices in depth is more than made up for by the ecumenical scope of the book. After all, Little Eyes is not really about the kentukis at all but about the people who use and abuse them, and the colorful, cosmopolitan cast of the novel provides the perfect sample for anyone curious about the effects that stewarding a remote-controlled, mechanical companion might have on human psychology—or rather cyber-psychology, the developing field of behavioral science that explores the manifold ways in which technology influences human emotion. But just like the internet, the kentukis also provide a unique outlet for humanity’s deepest, most enduring desires.

For the dwellers, inhabiting the body of a kentuki, for all its limitations, offers an unprecedented means of escape. “There were people willing to shell out a fortune so they could spend a few hours a day living in poverty, and there were people who paid to be tourists without leaving their houses: to travel through India without a single day of diarrhea, or to witness the arctic winter barefoot and in pajamas.” This is the case with Marvin, an Antiguan schoolboy who, plighted by bad grades and a stern, irascible father, sinks every moment of his free time into his second life as a kentuki in Honningsvåg, Norway. As a kentuki, he is able to see snow for the first time, to make friends with other kentukis from across the world, and to swap the form of a young boy for the plastic carapace of a dragon: “he could live for a century as a kentuki without worrying about money.”

But the kentukis also provide a channel for more sinister activities. The first kentuki to which we are introduced, a misleadingly sweet panda, goes on to extort money from its keeper under threat of publicizing footage of her in the nude, of her mother defecating, of her sister masturbating. Later on, we learn that hundreds of cases of kentuki-related pedophilia have emerged. The kentukis can be turned to the common good too, of course, as when the Croatian partners Grigor and Nikolina, who operate dozens of kentukis for the purpose of selling them to clients who desire a specified connection, discover a kidnapped girl through a connection in Brazil. Through a laborious, fortuitous sequence of events, the couple facilitate the girl’s rescue, though with unintended consequences; and as we flick between these stories, like Grigor and Nikolina flicking between the screens of their many kentukis, a coherent theme of dread emerges, in which we, as mere viewers, are powerless to intervene.

Not unlike Xú Bīng’s 2017 film Dragonfly Eyes, which pieces together a complete narrative from surveillance footage across China, the deeper narrative woven by these superficial episodes is bleak and merciless. Little Eyes is, at heart, a cautionary tale.