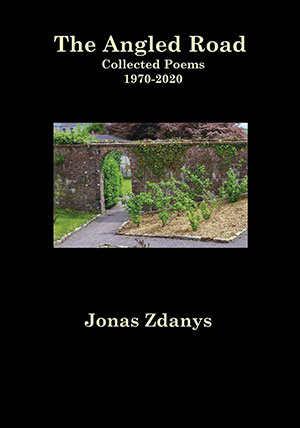 A REMARKABLE POETRY career is packaged in this collection. Jonas Zdanys has published poetry in English for fifty years. Additionally, he has published works in Lithuanian while also serving as the foremost translator of Lithuanian works into English. Together, his literary output exceeds fifty titles. This latest collection features most of his poems published in English during the past fifty years. The titles are arranged by publication date, from the latest, Notebook Sketches, published in 2019, to the earliest, with a significant amount of writing from 1970, featured in Voice on an Anthill.

Emily Dickinson’s “angled road” of experience is the touchstone for Zdanys, her lines declaring a “paradox” that surpasses intellectual abstraction to confirm the authority of art. His experience in poetry is profound and multifaceted, following a varied, bilingual academic career while demonstrating personal involvement with stylistic development. Given this, I am struck with the consistency of his tonal quality and thematic awareness, evident throughout his career. Yet no poem from his eleven volumes represented here sounds monotonous nor seems repetitive. Each poem, each line, contains its own vibrancy, its measure in time. Each poem is a living cell making up a discerning body of work.

Of his several themes, the actualization of the self, situated within contexts of positive, life-affirming tension between dark and light, seems most prominent. A healthy regard for human struggle amidst looming mortality gives his work a mythic quality without being overwhelmingly fatalistic. The poetic contexts often make use of landscape and other elements and features of the natural world. His use of nature, however, is not a simplistic, misplaced reverence, nor, on the other extreme, is it a pessimistic naturalism. Zdanys balances the natural with the human as a living communion, always made aware by a confidently asserted, honest narrative voice. The poems suggest a self-awareness concomitantly linked to a worldly awareness. Appropriately, the immediacy of mortality is felt, but it is not morbid or overwhelming. His poetry consoles while challenging obvious human limitation.

To achieve this, Zdanys’s use of language demonstrates control (line control may be his most significant quality) without coercion or constraint. His lyrical quality consistently resolves into an epiphanic moment that satisfies the reader and the contextual demands of the preceding lines. One example of his lyricism may be seen in Three White Horses: “Truth tastes like ashes in my mouth / as I sit in the deep gray light.” Often individual poems are untitled or are identified by the first line of the poem. This stylistic choice creates a chain in which one poem links to preceding poems and anticipates a succeeding poem. Such a pattern is evident in Red Stones (a collaborative project with Steven Schroeder’s artwork): “the wind stirs under the back stairs, / drifts across a transparent dark / where nothing begins, nothing ends.” The successive linkage of poems renders a cumulative effect, the power of observation gaining as each poem, along with the combined, collective context containing the individual poems, moves to completion. Many of his works move in such a cumulative procession, and reading them as such obviously establishes their fullest effect.

Interestingly, however, almost any of the individual parts of a poem or a stanza from one of Zdanys’s books may also be read in random order with satisfying results. His cumulative style reinforces the lyrical power felt throughout this collection. Consider these haunting images from St. Brigid’s Well (one passage from a continuous, single-volume poem consisting of fifty-nine stanzas): “The red shaft of water shudders in the wake. / Midnight blooms in the west. I am closed and pale, whiter than stars / whelmed at the stroke, part of the fragile / patterns and urgent movements caught / in the undertows of the town.”

Perhaps my favorite of Zdanys’s books is The Kingfisher’s Reign. Originally published as a collection of prose poems (they are set in verse in this volume), The Kingfisher’s Reign features a narrative voice that organizes around a collection of lyrical vignettes. Like most of his work, this collection displays a splendid interaction between speaker and the natural world. The contrasting sense of dark and light, shadowing the narrative voice, echoes throughout the book. The Kingfisher’s Reign concludes with an especially powerful poem, “The Revenant”: “The shadows are quickening / and the day begins seductive and eternal. / I lift my arms in greeting like heavy wings. / I tremble in the gathering light.”

The Angled Road is a significant work in American poetry.