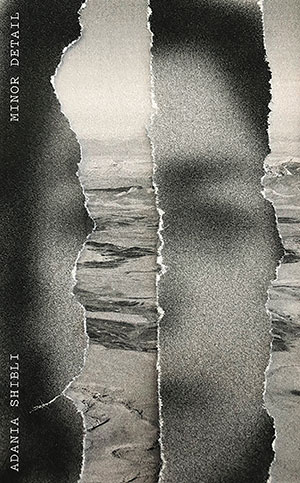 ADANIA SHIBLI'S THIRD NOVEL, Minor Detail, cements her position among the top ranks of Palestinian novelists working today. In her latest book—a short but powerful novel—Shibli interrogates a world of unstable and shifting boundaries and borders, from the Negev Desert a year after the 1948 war to a contemporary version of the tightly controlled lands of Palestine and Israel.

Written in two discrete sections, Shibli centers the first on an encampment of Israeli soldiers in the Negev Desert during the late summer of 1949. The buildup of dreamlike, haunting prose, which describes the soldiers’ lives in the desert and their patrols in the intoxicating heat, finally builds to the rape and murder of a Palestinian teenage girl, who is then buried in the sand.

The book’s second half is set decades later and follows a woman office worker in Ramallah. The unnamed narrator offers the reader unfettered access to her interior philosophical ruminations. Early on, she muses, “Borders grant a person a sense of serenity, despite everything else.” Yet the woman is restless and unsatisfied. At work, she reads an article about the death of a girl in 1949. The woman discovers the girl was killed on the same day as her own birthday, but twenty-five years before she was born. The woman surmises, “One cannot rule out the possibility of a link between the two events, or the existence of a hidden connection.” The terrible nature of the girl’s death, a minor detail in the history of the region, becomes a catalyst for the woman to investigate the case further.

Shibli artfully plays out the rest of the novel as a quest narrative. The woman leaves the West Bank to search for the girl’s burial location and soon contends with security checkpoints and hostile soldiers and informational dead ends. On her journey deep into the interior of Israel, we feel the paranoia and claustrophobia, the assaults on the idea of Palestinian autonomy. Parallels between the woman and the girl now reverberate emphatically between the novel’s two sections.

Shibli’s use of stylistically different timelines marks her boldness as a novelist. Indeed, the novel’s shocking conclusion amplifies Shibli’s artistic version of aligning the lives of the women, reminding the reader that the region is still an area fraught with oppression and needless death.