Dressed for a Dance in the Snow: Women’s Voices from the Gulag by Monika Zgustova 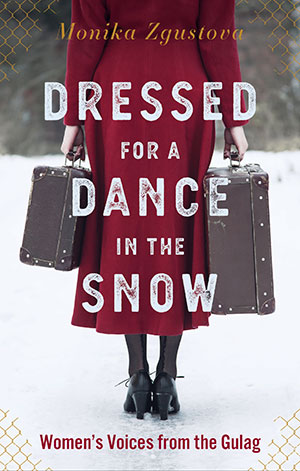 DRESSED FOR A DANCE IN THE SNOW represents a work of oral history based on interviews the author conducted with nine female survivors of Soviet labor camps beginning in 2008. Most of the interview subjects whose stories are included in the volume are well known: they have been interviewed many times, their stories have been featured in the press and in documentary films, and, in a number of cases, they have written extended memoirs about their time in labor camps. They include Zayara Vesiolaya, the daughter of the writer Artem Vesyoly; Valentina Iyevleva, an actress whose memoirs describing her participation in camp theatricals are well known; and Susanna Pechuro, arrested in 1950 at the age of seventeen for participation in a real anti-Stalinist organization (as opposed to a fabricated plot dreamed up by secret police investigators—something that was much more common). Two of Zgustova’s subjects were imprisoned after Stalin’s death: the noted dissident poet Natalia Gorbanev-skaya, who was arrested and forced into punitive psychiatric confinement after participating in a demonstration protesting the 1968 Soviet invasion of Czechoslovakia, and Irina Emelyanova, the daughter of Olga Ivinskaya, Pasternak’s lover, who received a camp sentence in 1960 for her role in the “economic crime” of receiving foreign currency—royalties from the publication of Pasternak’s Doctor Zhivago.

Zgustova does a good job rendering each woman’s story as a clear and coherent narrative. Chapters are often framed with short introductions describing the woman’s apartment or her interactions with Zgu-stova. At times, Zgustova’s voice interrupts the flow of a woman’s story to add additional reflections or information, but often the women appear to speak without interruption. Whole documents (letters, poems, the texts of songs) are at times interpolated into the text. As this description perhaps suggests, Dressed for a Dance in the Snow contains carefully constructed historical narratives as opposed to raw interviews. This makes for a readable text, but it may frustrate some specialists: it is never clear when a survivor’s words are transmitted exactly and when a story has been reworked or paraphrased. In some places the translation obscures details that may matter to a specialist. Names of specific Soviet institutions are sometimes rendered in such an odd way that it is hard to understand what exactly is meant (e.g., “The School of History and Documentation”—apparently a translation of Istoriko-arkhivnyi institut). Such translation issues may reflect the fact that Russian terms and names were translated into Spanish by Zgustova before being rendered into English for us by Julie Jones. By and large, Zgustova seems to take an uncritical attitude to her source material: she does not reflect on larger problems of memory or explicitly consider the ways in which time, repeated retellings, and the influence of published memoirs by other survivors may have shaped the stories of those she interviewed.

Dressed for a Dance in the Snow may seem less novel to English-language readers than it did to readers of Zgustova’s original Spanish-language text just because so much material has been published in English in recent decades on the experience of women in Soviet labor camps. The wonderful volume edited by Simeon Vilensky, Till My Tale Is Told: Women’s Memoirs of the Gulag (1999), Unforced Labors: The Memoirs of Ada Federolf and Selected Prose of Ariadna Efron, edited by Diane Nemec Ignashev (2006), and Memoir of a Gulag Actress, by Tamara Petkevich (2010) all overlap in certain respects with Zgustova’s material. They also all offer more exact translations of source material directly from Russian as well as helpful biographical notes and/or an extensive scholarly apparatus.

Dressed for a Dance in the Snow, however, provides a poignant introduction to the topic of women in the Gulag for general readers. In each of the nine stories, we see a life interrupted and survival under the most horrifying circumstances. Zgustova notes that although the survivors she interviewed “remembered their years in captivity with horror,” many also told her that “their lives would have been incomplete without that experience.” Certainly, Dressed for a Dance in the Snow shows us how nine women persevered in the face of terrible odds.