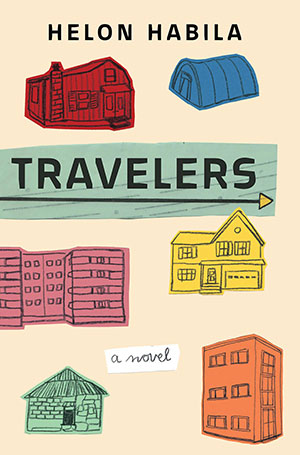 HELON HABILA'S NEW NOVEL, Travelers, unfolds against the principle of Vergangenheitsbewältigung, the German collective reckoning with the ghosts of the Nazi past. This is true, even as the most harrowing trauma motif in the narrative is the inhospitable Mediterranean, a new middle passage that has claimed the lives of countless African migrants and refugees seeking safe haven or economic opportunity in Europe. Still, the scars and legacy of the Holocaust remain unmistakable, and a key setting—itself a salient if understated character—is a Germany that has vowed to take stock of its past and live up to its own pledge of tolerance, pluralism, and the welcoming of immigrants, even at great domestic political expense.

More broadly, Travelers also bears testimony to an undeniable historical and demographic development over the last two decades, namely the shift away from the colonial métropole as the natural and inevitable destination for African migrants seeking education and better livelihoods—England for Nigerians, Kenyans, Ghanaians, for example; France for Ivorians, Senegalese, Congolese, et al.; and Portugal for migrants from Angola and Mozambique. The aftermaths of European colonialism are now the common responsibility of all European countries, not just the colonial powers. They all must face up to the refugee crisis, whether it be Germany, Switzerland, and Italy or those countries that serve as transit points for migrants—Turkey, Greece, Hungary, Bulgaria, countries that, like the refugees they often reject, desire entry into the European Union.

Habila’s novel is comprised of six interconnected portraits of African migrants and shares its title with a series of portraits by Gina, the wife of the narrator of the first story, “One Year in Berlin.” There is the story of Manu, a man who sits for one of Gina’s portraits in the first story but who is the teller of the next story, wherein he relates having to settle for being a bouncer while awaiting the return of his wife and son, who are presumably lost in the Mediterranean. We learn about Mark, a radical student in Berlin whose birth name was Mary and who left an unbearable familial circumstance in his home country of Rwanda. We also hear the story of the daughter of a Zambian poet in exile as well as a man who braved passage through Turkey, Greece, and Bulgaria to reach western Europe.

In the process, Travelers renders the spectacle and taboo of interracial dating, the perils of being a nonheteronormative African youth, as well as the exploitation that awaits some African migrants, especially women, who find themselves in vulnerable situations with little recourse to legal or economic protections.

Travelers refuses nostalgia for the cultural energies of African decolonization and the restorative promise of pan-Africanism. But it remains deferent to and inspired by the ghosts of Tutuola, Soyinka, and Achebe—who appear to have given this novel its recognition of how stories mine inner experiences, sketch faces, and speak the names of those who experience history, rescuing them from drowning anonymously in the sea of unrealized hopes.