Dostoyevsky Reads Hegel in Siberia and Bursts into Tears by László F. Földényi 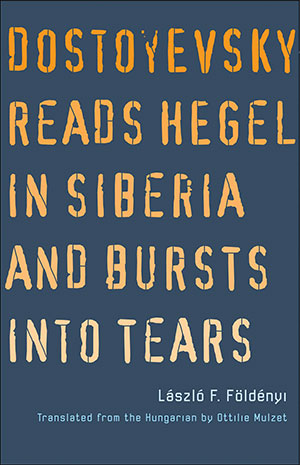 LÁSZLO F. FÖLDÉNYI is a widely lauded Hungarian essayist, cultural critic, and professor at the University of Theatre, Film, and Television in Budapest. Dostoyevsky Reads Hegel in Siberia and Bursts into Tears gathers Földényi’s essays written between the years 1990 and 2015. According to its back cover, the collection “considers the fall-out from the end of religion and how the traditions of the Enlightenment have failed to replace neither the metaphysical completeness nor the comforting purpose of the previously held mythologies.” Whereas not all essays tackle this thesis head on, all contain at least undercurrents and passages underscoring it.

Throughout, the author proves himself to be highly educated in matters of art and “high culture,” particularly German writers, artists, and thinkers. “A Natural Scientist in Reverse,” which follows an analysis of Caspar David Friedrich’s painting Wanderer above the Sea of Fog, and “Kleist Dies and Dies and Dies,” which recounts Heinrich von Kleist’s tragic double suicide, are two prominent examples of this. The litany of names he invokes is impressive. There is hardly a German intellectual of the last two centuries whose name does not make an appearance in one of his essays.

Földényi is at his best when he sticks to his core—the history of art, literature, philosophy. Sadly, as the cover proclaims, his collection comes with a mission that upholds a long tradition of postmodernist attacks, not only on science as a way of attaining knowledge but also on modernity more generally:

“[T]he physicist who declared that measurability is the last criterion of reality was the victim of a misapprehension.” (“Mass and Spirit”)

“[He] projects his own conceptions and thoughts onto nature, violating it as much as scientists do.” (“A Natural Scientist in Reverse”)

Building on the old sentiment that science only takes away without adding, the author leans into a yearning for a time predating modern science, when our understanding of natural phenomena and our own species was dominated by mythology—a time when people looked not to scientists but to authority, clergy, and belletrists like Földényi to guide their deepest level of understanding.

This idea of science as the destroyer of all magic, as disallowing us anything outside of the purely material, is naïve and dangerous, particularly in a time often characterized as “post- truth.” Science does not claim that our first-person experience of feelings or consciousness are not real or somehow less real. For now, they are simply not in the scope of our scientific possibilities, and perhaps they will never be. Claiming an evolutionary purpose for love does not diminish our love for a child, partner, or parent. Instead, one may choose to view an understanding of how evolution of past life imbued us with the capacity for love as elevating, rather than diminishing it.

One cannot shake the feeling that Földényi, along with other postmodernists, understands the Enlightenment to stand for replacing lush green forests with coal plants and conveyor belts, replacing harmony and unity with the dissolution of our selves in a gray mass of empty bodies, slouching through ever-expanding blobs of concrete and steel. A strikingly ignorant view of human development over the past three centuries, which has seen reason, science, and humanism—the ideals of the Enlightenment—staggeringly improve equality, life expectancy, education, health, happiness—nearly any metric you might devise to track the evolution of conditions of human life.

However, Földényi’s critique does not only follow the usual postmodernist track but comes with a decisive religious spin. In “Mass and Spirit,” he claims that our souls have mass—in fact, “our souls are nothing other than the ‘condensation’ of the divine mass,” he writes. According to Földényi, labeling ourselves as dead and soulless “masses” lets us regard ourselves as the “prime movers of the universe,” usurping “the role of the Creator.” The indifference to our spiritual roots, the refutation of God and the divine, to him, are the ultimate causes of “increase in population, the growth of human density, the proliferation of megalopolises.”

His equation is as simple as it is naïve: Man used to be with God. Then came the ideals and products of Enlightenment that broke this unity. Man has been lost and tormented ever since.

It is important to discuss how community and spirituality can survive in a modern, agnostic society. Sadly, Földényi’s critique never moves in this direction. It remains wholly unclear how exactly and to what exactly we are to go back to. In “Mass and Spirit,” for example, his answer never goes beyond: “To ‘God’” or “To our ‘divine mass.’”

Technological advances and accelerated modern life have not only brought good. However, notwithstanding global catastrophes, progress of knowledge and technology is a fundamental reality of human existence. Simply condemning it and calling for a retreat into an imagined past Eden is not just foolish but dangerous. Over the past decade, the rise of autocratic leaders—of course, enabled in unprecedented ways by technology—has at its core not an embracing but an abandoning of Enlightenment ideas. Trying to track a way through the reality of progress that can preserve humanism at its core is the only sensible way forward.