The Splendid and the Vile: A Saga of Churchill, Family, and Defiance During the Blitz by Erik Larson 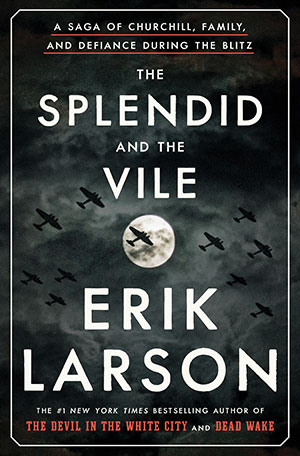 AFTER READING this study and skimming the end sections, I stand in awe: what one man can research, consolidate, and narrate in prose that reads like a novel. Erik Larson seems to be an industry unto himself.

Given all that has been written about Winston Churchill and the war years, the author sought a more intimate story: what it was like for the prime minister and his circle during 1940 and 1941, after Dunkirk, when England stood alone facing the Nazi juggernaut.

Larson accesses diaries, letters, public “Mass-Observation” accounts, in addition to the standard studies, to give a close picture, month by month, of Churchill, his family, and his closest colleagues. Happily, Larson also inserts chapters to reveal the thinking of Göring, head of the Luftwaffe; Goebbels, propaganda minister; and Rudolph Hess, who landed a plane in Scotland in a futile attempt to negotiate a peace in 1941.

One appreciates Larson’s attention to the morale of the English people undergoing repeated attacks in the cities. Clementine Churchill became quite concerned with conditions in the shelters, where many chose to sleep when there was a “bombers’ moon.”

Finally, there is the Great Man himself, never quite stepping off his mythic pedestal, uplifting the populace with regular tours of bombed areas, speaking by radio to the nation. The reader also sees a man in his moods, as war news comes in, a man with appetites for eating, drinking, smoking, and talking till the wee hours of the morning.

Reading of Churchill’s and England’s trials during 1940 and 1941, month by month, one becomes quite unsympathetic with America’s sitting out for so long. It should have been clear to F. D. Roosevelt and the American public that England suffered immensely and would not be able to withstand a full-scale invasion. Why did it take Pearl Harbor to bring the US into the war?

One wants to know more about public sentiment for staying out, the resistance even toward the Lend-Lease program, Roosevelt’s excessive caution. Had the failure of the League of Nations, the Depression, the Dust Bowl so turned our concerns inward? Did we feel secure because an ocean separated us from Europe? Can we expect another book?