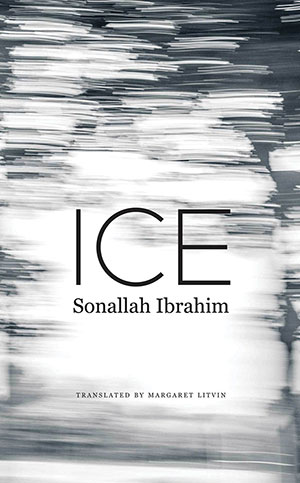 IN 2016 I CHATTED with Sonallah Ibrahim about his then-new novel, Berlin 69, published in Arabic in 2014. I asked him: “Did your experience in East Germany and Russia (1969–74) give you a useful perspective on Nasser’s version of socialism?” He replied: “The dream was fantastic, but it remains a dream.”

His new novel, Ice, translated by Margaret Litvin, takes a scalpel to the “fantastic dream” of communism through the eagle eyes of a wry Egyptian narrator who has come to study in Russia. The novel echoes some of the themes of Berlin 69: coping with paranoia and the fear of intelligence services, nostalgia for Egypt, transient relationships with foreign women, the hunt for scarce commodities, and a corrupt party elite. However, unlike Berlin 69, the structure of Ice mimics a diary—and depends on the writer’s telegraphic but carefully honed style, which gives the reader a sense of the chilling, grim texture of daily life in Soviet Russia in the 1970s. Ibrahim lived in Moscow during a crucial period in Egypt’s history, following the 1967 defeat and Egypt’s 1973 victory over Israel. Ice is an episodic novel, rather than a plot-driven one, which quietly circles around the “fantastic dream” until it has been picked clean, like a carcass.

The “dream” begins to curdle soon after the narrator’s arrival to the obshchezhitie, the student dorm. The officials in charge of the dorm want to place a Russian in with the foreigners so they can report on their activities. Besides the discomfort of being constantly watched, there is the problem of privacy and space. An inordinate number of foreigners are crammed in the same dorm room. The Egyptian narrator, presumably a younger version of Ibrahim, is awed by his roommate, Hans, a handsome East German, a Don Juan who attracts women and men. A constant parade of friends and acquaintances marches through the small room, along with plenty of uninhibited foreign and Russian girls, who are generous with their bodies. The reserved narrator tires of the bacchanalia and yearns for solitude and time to write, read, listen to classical music, or work his way through the Arabic newspapers about the disturbing news from Egypt. Desperate for a little privacy, he moves out of the broom closet to an even tinier abode with a cranky old Russian lady—only to jump from the frying pan into the fire. The landlady is nosy, lonely, and demanding and comments on his love life. When the narrator wants to heat up some meat, he finds himself fighting over the use of a saucepan!

Shortages of goods and commodities in a state-controlled economy lead to other absurd situations and behavior. When he is getting medical treatment, the doctor clearly states that he needs a new tire for his car. The black market flourishes. On another occasion, he goes to a bar with his friend, Hamid, who tells him: “Secret deals are made here—timber smuggled to Central Asia, black caviar shipped to the West in tins labeled ‘Herring.’” Not surprisingly, party officials get the goodies. At a Communist Party conference, the narrator notices that a party member has meat in his briefcase.

Ibrahim juxtaposes Communist Party propaganda with daily life, which underscores its hollowness. On his way to the language institute where he is studying Russian, he notices the banners: “The Party and the People Are One”; “Power to Labour”; “Long Live the Soviet People, Building Communism.” Yet, after his language lesson, he eats “a piece of cabbage that smelt like dishwater, black bread, a goulash with scraps of meat in it, tea.” He attends a half-hearted celebration of the anniversary of the October Revolution, which was held on November 7. The narrator comments that it is dull and few students attended. The harpist who was playing “looked like a mummy beyond the grave.” He observes that she looked like she was going to “kill herself on the spot,” playing a piece like “Farewell to Life!”

These kinds of observations are typical of Ibrahim’s sense of political irony. The narrator also points out draconian repression of freedom of expression by the Soviet state. Aleksandr Solzhenitsyn, the novelist, was accused of having a relationship with an opposition newspaper; the physicist Andrei Sakharov had met with foreign journalists. Both Sakharov and Solzhenitsyn were denounced by other intellectuals. He noted that because of their “sincere remorse,” they were sentenced to three years in prison, another three years of exile.

There are a few glimmers of light in this bleak landscape. The narrator takes advantage of the rich cultural offerings that Moscow has to offer: tickets are cheap at the Bolshoi, and French films are frequently screened. He has a wide circle of international acquaintances and gets to know many Russians. On one of his first days at the dorm, he goes with Hans, his roommate, and Zoya, a Russian girl, for a magical stroll in a nearby park. Despite the fact he doesn’t completely understand her Russian, the narrator is charmed by “the musicality of her voice.” Throughout the novel, he carries a torch for Zoya, who only sees him as a friend.

In between all the wild parties with Russians and other expatriates, concerts and films, and the Don Quixote–like quests for daily necessities and commodities, another story is wedged in, the story of political drama in Egypt and Palestine. The narrator works his way through a huge stack of Arabic newspapers, clipping out headlines and articles about historic events from Egypt and the Arab world. Ibrahim frequently incorporates nonfiction narrative in his fictional texts without comment. For example, an Algerian gives him a newspaper and points to this news: “It said Sadat was considering a suicidal gamble to save himself and his regime; negotiations were going on between Arabs and Israelis for a reconciliation.”

Later, when the Egyptian army crossed the Suez Canal into Sinai, which was occupied by the Israelis, the news is merged with an emotional response. Egyptians gather around the radio and listen to military marches: “We felt stunned and feared a repeat of the 1967 tragedy. I remembered the songs people sang to Nasser at that time: “Abu Khaled our dear hero / We’ll reach Tel Aviv tomorrow and Umm Kulthum and Abdel Halim Hafez.” They learn that the Bar Lev Line had fallen—Egypt’s liberation of Sinai in 1973 forced the Israelis to negotiate with them, which eventually resulted in the Peace Agreement of 1979.

Besides political discussions, the author also includes poignant scenes with other Arabic-speaking students who, like his narrator, feel alienated and displaced, far from home. Frustrated that they cannot fully express themselves in Russian, they seek comfort in the company of other Arabic speakers. They meet Tadros, a Copt from upper Egypt, who is studying agriculture. He plays the oud, singing the songs of Sayed Darwish, Mohamed Abdel Wahab, Farid al-Atrash, and Umm Kulthum. He tells the group: “We can’t escape this music. It’s inside us, not only because it’s splendid and beautiful but also because it’s so entwined with so many moments of our childhood and adolescence.”

They listen to news about war in Egypt, but violence is not far away in Moscow, either. Zoya is assaulted and the narrator visits her in the hospital. He is sensitive to the problems of women and comments on underground abortions, domestic abuse, and alcoholism. His roommate, Hans, is beaten up after a New Year’s party by some homophobic Russian toughs. He is brought back to the dorm room, naked, wrapped in a blanket.

Ice is an appropriate title for Sonallah Ibrahim’s novel. Moscow not only feels cold to the narrator physically but also emotionally. The narrator has plenty of sex, but little intimacy, except with the fragile, glamorous Zoya. Living in Moscow is also a political balancing act, like walking on ice—the Russian secret police or spies are always lurking around. Yet, as a member of the Egyptian Communist Party, he cannot go back to Egypt, either, or he will be arrested. Occasionally, the snow and ice are stunning. However, the dominant mood in this novel is one of deprivation, isolation, paranoia, and severe weather—literally, politically, and emotionally. After the disastrous New Year’s party where Hans was beaten up, he wants to escape the dorm. But the harsh weather even denies him the pleasure of a simple stroll: “The snow was falling thick and fast. It covered everything with white, even the trees. It started to accumulate on my overcoat, my hat and my eyebrows. My fingers and toes began to freeze. Where to go? I turned around, heading back to the obshchezhitie.”