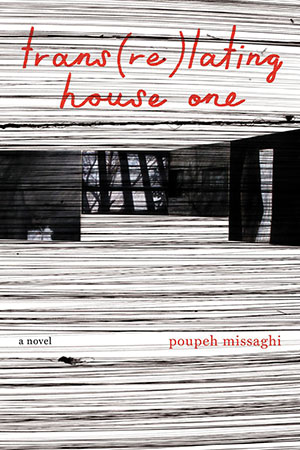 POUPEH MISSAGHI'S DEBUT, trans(re)lating house one, is a hybrid novel set in the aftermath of Iran’s 2009 election. Missaghi’s narrator searches for statues that are disappearing from Tehran’s public spaces, and as this search takes her across the city, the form of the novel shifts between brief chapters, to quoted passages by Anne Carson, Roberto Bolaño, bell hooks, Clarice Lispector, and Marguerite Duras, to lists of missing statues. The search for disappearing statues becomes interwoven with a record of missing and state-murdered people. The narrative styles of fiction, nonfiction, and poetry—plot and characterization, a self-reflective first-person speaker, line breaks, lists, single-page sentences—blend and interrupt and juxtapose. “I want to start with the slippery, the intangible. I want to start with the impenetrable, the incomprehensible. I want to start with the world of dreams.” So the novel begins, aptly described by Azareen Van der Vliet Oloomi as “a haunting political cartography” of Tehran’s missing people and art.

One of the questions driving Missaghi’s novel is, Who has the right to tell the stories of the dead? Poignantly, searchingly, the narrator asks the reader to consider: “How can we trust? The witness, the exposure, the words, the documents, the evidence, the freedom?” The novel’s geography and exploration of place and memory are complex; chapters and lists and imaginings are “imperfect interpretations / translations,” set between temporalities, histories, and locales—Denver, Tehran, the past and present—asking the reader to consider, “Can narratives tell stories the way bodies do?” The act of remembering and memorializing is simultaneously affirmed in a novel that refuses to look away from various complex realities in Tehran. In her 2017 essay published in Asymptote, Missaghi writes, “We, as writers and translators, cannot afford the luxury of separating ourselves from the sociopolitical contexts of our work and need to strive to continuously raise awareness—both our own and others’—about such contexts.”

A novelist, translator, professor, and editor, Missaghi has taken a narrative approach that infuses her novel with this ethic. One of the ways the novel does so is through an aesthetic blurring of the author/narrator subject position by continually collapsing the psychic distance between them. “And, I ask (her, myself) whether anything can be accomplished without taking risks.” In the brief foreword, Missaghi writes, “Part of this work is based on true (hi)stories, but I make no claim about the factual accuracy of my trans(re)lations of its events, places, individuals, and peoples.” This narrative effect centers deftly and with sensitivity the sociopolitical contexts the work and its author explore while consistently reminding the reader of the subjective role of narrator as filter, as guide. At times, the novel reads like a lyric essay in this centering, as it searches memory, trauma, place, and (hi)stories for what is missing. “Without the questions, the book would become a manual and a postcard, a goddess posing for cameras, too pleased with her limbs and her arms, with her words and her voice.”

Interwoven with such complex ethical questions about representational art in the face of state murder is a gorgeous story of two lovers who smoke on balconies, desire each other’s bodies. Formally braided, lyric and dense, the novel recalls Northwood, Maryse Meijer’s alchemical surreal account of pain and desire written in lineated language and spare single paragraphs that accumulate and swirl, of Alice Notley’s In the Pines, as well as José Revueltas’s The Hole and Willem Frederik Hermans’s An Untouched House.

Missaghi’s narrator quotes Giorgio Agamben’s Remnants of Auschwitz: The Witness and the Archive: “In the Nazi camps, the tortured bodies could not be named as such. Under no circumstances were they to be called ‘corpses’ or ‘cadavers,’ but rather simply Figuren, figures, dolls.” Throughout the novel, there is a mounting list of corpses.

How does the writing of witness tell the stories of the dead without objectifying their lives in the process? This question seems central to Missaghi’s formidable first novel, which centers a complex act of witness while also questioning the act of witnessing. It is a gorgeous and brave book, not to be missed.