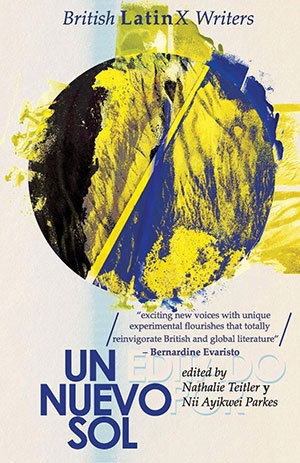 THE IDIOSYNCRASY OF my own origin story made me particularly fascinated by Un Nuevo Sol, a collection of works by British Latinx writers from Flipped Eye Publishing, the London-based nonprofit press that has gained fame in recent years for publishing, among others, the work of Warsan Shire. I was born in small-town Oklahoma, USA, to British parents; I grew up speaking with an English accent (I used to wonder how, but now it occurs to me, why would you lose an accent that helps rather than hurts?); and as a teenager I started learning Spanish from classmates: children of other immigrants whose difference was often denigrated rather than appreciated. I am by no means Latinx and only tangentially British, but as a first-generation Oklahoman with a British passport who lives a measure of his life in Spanish, I was happy to hear about Un Nuevo Sol and even happier to read it.

This collection is built around the shared community of its authors: a community that, as editor Nathalie Teitler points out, now represents the fastest-growing population in London. It demonstrates the diverse ways in which British Latinx writers approach their origins, evince them on paper, and sometimes come to terms with identity crises unseen anywhere but in their own work. In poetry, Leo Boix links the mud of Quilmes, Argentina, to the mud of “mown English lawns”; Juana Adcock erases the seams between formal English verse and Mexican slang; Katherine Lockton reveals the truth, perhaps surprising to US readers, that mamá can be translated as not only “mom” but also “mum”; Patrizia Longhitano uses “priggishness,” that most British of nouns, to name the casual xenophobia of “two ladies at the bus stop”; Maia Elsner retranslates Neruda and then tells us why she couldn’t let the old translation stand through her own verse.

Prose writers also shine through in Un Nuevo Sol. Karina Lickorish Quinn presents the tale—worthy of Julio Ramón Ribeyro, and appropriately set in Miraflores, Peru—of a xenophobic gringo who seals himself off from the outside world of his adopted country until he quite literally rots. Her fiction stands out in the book as an incisive illustration of the difference between expat and immigrant. Armando Celayo, in an excerpt from his novel Downward Is Heavenward, tells a story with an Oklahoma connection, revealing how the best-laid plans of immigrant families sometimes go awry and how these dark detours sometimes lead to unexpectedly bright destinations. In both verse and prose, all the included writers show off intensely personal styles and subjects, united by particular geographies but disparate in their concerns, their genres, and their lived experiences.

It is important, I think, that Un Nuevo Sol is subtitled “British Latinx Writers” rather than “British Latinx Writing.” This collection places its focus on the people behind the words, not just the words themselves, including detailed bios of every participant along with an interesting interview of featured playwright Gaël Le Cornec. The creator-centered approach adopted by editors Nathalie Teitler and Nii Ayikwei Parkes, and by Flipped Eye in general, shows a conscious commitment to helping literary artists advance in their careers—a commitment that is necessary if underrepresented writers are to continue living from their work. In this practical sense, Un Nuevo Sol is a collection that seeks to do right by its writers as well as its readers.

Nathalie Teitler writes in her introduction, “To be British Latinx is to live the experience of constantly translating yourself on all levels; to be accustomed to people addressing a version of you that bears little resemblance to your actual identity. It is to know what it means to be both present and invisible.” Throughout this collection, writers from a wide range of backgrounds and experiences put this self-translation into practice, this time not to fit in but to reveal their true identities. They present the invisible parts of themselves in their own unpredictable, heterogeneous, unapologetic ways, making language their own. Un Nuevo Sol is a powerful reminder of a long-standing presence that has much to say if others listen. And, in a Britain increasingly wracked by its own identity crises, I hope it is also a sign of things to come.