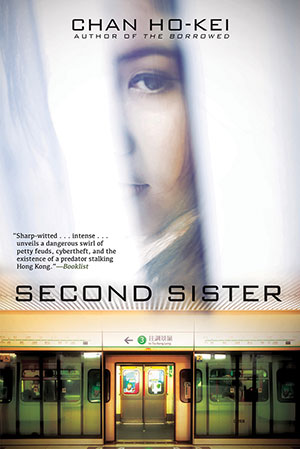 CHAN HO-KEI, who lives in Taiwan, is one of the most successful rising stars of Asian crime writing. Born in Hong Kong, he began writing at age thirty-three. His first novel, The Man Who Sold the World, won the top award in Chinese mystery publishing, the Soji Shimada Mystery Award. His first novel translated into English, The Borrowed, was one of the most memorable novels I’ve read in several years, proceeding dexterously through a series of mystery-genre styles and linked to the political history of Hong Kong by tracing in steps the progression of a police officer rising through the ranks. What could have been a merely theoretical exercise in virtuosity filled all the simpler pleasures of entertainment fiction and, despite its length, read quickly.

A new novel, Second Sister, the story of a woman trying to uncover the truth behind her younger sister’s death, has just been released in the anglophone market. Au Nga-Yee and Au Siu-Man are orphans, their widowed mother having followed her husband to the grave. They have lived in difficult circumstances, but the older sister, Nga-Yee, is managing to support them. She returns to her apartment building one day to find that Siu-Man has apparently thrown herself off the top floor. The police, of course, and everyone else believe that the act was suicide, and, in the familiar pattern of many mysteries, Nga-Yee won’t believe it. In the long-hallowed tradition of the amateur detective, Nga-Yee sets out to find the truth, learning that her sister was being libeled online, beginning a dark odyssey through the world of hacking and getting assistance from a mysterious cybersecurity expert and hacker called “N.”

We live in a digital world, and I think too many writers dodge that complex reality primarily because the implications aren’t clear yet or because they don’t really understand it and, ironically, because of their discomfort, usually oversimplify it into something grossly dystopian. Chan Ho-Kei has been a software engineer and game designer, however, and has a tight grasp on the technical world, but the problem is that we readers largely don’t, and he knows we’re not reading with a firm knowledge of coding and such. To keep us on the journey, he ends up explaining a lot and reminding us of things he’s already explained. Unfortunately, there are many places with repetitions of ideas and plot elements, and many of them have nothing to do with the more technical aspects of the story. The novel weighs in at more than four hundred pages, like The Borrowed, but it seems much longer. A big ship should carry a big cargo. There are ingenious twists in the plot, some real cleverness, but is there enough story, complexity of character, and thematic content? Although the sense of Hong Kong is strong, Second Sister isn’t as strong as The Borrowed in implicitly commenting on the social and cultural aspects of life there.

There’s also a certain quality here of the composed best-seller—that is, a novel that rings all the appropriate bells to make it predictably popular for marketing purposes. Did I mention that besides Chan’s technical expertise, he has been a scriptwriter and an editor of comic magazines? A major part of the story concerns itself with sexual harassment, a more-than-worthy subject for our times, if handled right, but difficult and maybe a too-obvious choice to gin up the revenge theme of a popular novel. Just after something on the page reminds you of Raymond Chandler’s The High Window, you think of Lisbeth Salander of Stieg Larsson’s “Dragon Tattoo” trilogy, and then N does something to remind you of Sherlock Holmes. Coincidence? As so many fictional detectives say, “I don’t believe in coincidence.”

Chan Ho-Kei seems to be a master of form and destined for international success. Keeping an eye on him seems like a smart thing to do, but it remains to be seen how much the adeptness he has compares to how much he has to say.