The Eighth Life (for Brilka) by Nino Haratischvili 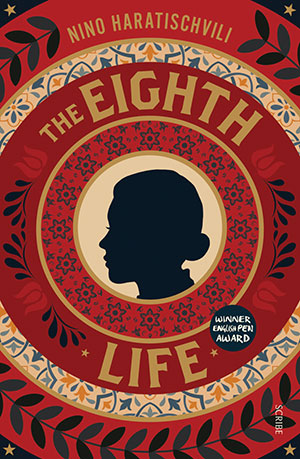 GEORGIA, AS A COUNTRY, has enjoyed some focus in the recent past among the literary circles of trade publishing and literary prizes. After being chosen as the guest of honor at the Frankfurter Buchmesse 2018, it has found visibility among other countries on the longlist of the International Booker Prize this year. Although literature from eastern Europe is hardly a rare sight on the Booker lists, The Eighth Life—a sprawling family saga originally written in German—is particularly significant because it deals with the plight of a country that has been caught perpetually in the crossfires of European history.

Through her debut novel, Georgian writer Nino Haratischvili rescues her country of origin from unfair prejudices, by which Georgia is often considered to be a provincial relative of sorts to Russia, less refined in all spheres of life, tastes, and culture. This, despite the fact that Georgians speak a different language and also utilize a different script (“the ornate script that looked to outsiders like a kind of secret code”). The book examines a small fragment of this silence in European history around the conditions of smaller eastern European countries under both regimes of fascism and Soviet socialism, under which they have faced equal measures of oppression, and is as much a tapestry of complex political upheavals, particularly throughout the twentieth century, as it is about trifling domestic contretemps playing out among several generations of family members.

The Eighth Life provides readers a bird’s-eye view of conservative Georgian society through a story spun around a family recipe for hot chocolate, which contains a secret ingredient that places a curse on any and all who consume it. The narrator, Niza, is a Georgian immigrant to Germany who recounts their family’s history to the eager ears of her niece. Brilka Jashi, the daughter of her beautiful sister Daria, is an orphan brought up by her grandmother living in Berlin. The plot chronicles the narratives of seven lives spanning across several generations—the eighth life being that of Brilka. The characters who populate this novel courageously survive war and impossible courtships, induced miscarriages and despotic political regimes, inhabiting a story that is about sibling relationships, marriages, and what it means to be an aunt or a parent living through times of financial strife and devastating destruction. The characters in the novel know what it means to wage a war against the ones you love most, and to win, and to live with this victory, which is irrevocably sullied by a ruinous sense of tragedy by virtue of the nature of these battles. The author borrows from rich literary traditions: there are hints of Tolstoy, Pasternak, and, from a different canon altogether, Charles Dickens (especially in scenes carrying sentimental import). As a more overt nod to War and Peace (and not just in length!), a significant character in the novel is named Kitty.

When—in a profoundly eerie scene at the heart of the novel—the character of Ida discovers a young girl among the ruins of her family’s home (“an old house with broken windows [that] had managed to withstand the bombs”), attentively playing the piano, one wonders whether indeed this girl stands as a metaphor for the country of Georgia, a community that survived the two world wars and the subsequent communist regimes while still resolutely pursuing their love for music, dance, and poetry even in the face of fatal ruin. An epigraph by an author or political figure heads each chapter. Sometimes this sets the tone for what is to follow next, sometimes it remains complementary to the themes dealt with in the chapter, and, at other times, the epigraph serves as a commentary filled to the brim with tragic irony. Ranging from figureheads like Vladimir Lenin, to writers like Nabokov and Steinbeck, to musicians like David Bowie and, in one instance, the Doors, Haratischvili’s eclectic choice of epigraphs never fails to surprise or delight. However, though the vast historical scope has been dealt with quite deftly here, the novel could certainly have benefitted from good editing. If ever the author intended to insert subtext or gesture into her scenes, the sheer volume of description in them—realist to a fault—invariably overwhelms any possibility of there being space for these elements. At times, the characterization, too, can seem heavy-handed, a bit overworked.

As I write this review, confined to a bedroom at my parents’ house, riding out our time till the virus is halted, reading this book provided a strange comfort and a rooted, substantial sense of affirmation that not all hope is lost. Not as long as we have community, finished sentences, the love of a few good friends, and laughter. This book was a sobering reminder that human society has lived through wars, famines, plagues, and other crises and that literature and other arts have always found a way to brave these contingencies and still manage to survive. In a vibrant and lithe translation, Charlotte Collins and Ruth Martin have rendered this 900-plus-page novel gracefully riveting—down to the very last part—which is supposed to remain a bit of a surprise. A Rosetta stone meant only for the eyes of time and for Brilka’s telling.

The narrator shows us how, in the end, the act of writing is an act of vindicating one’s past, of narrating the social histories of one’s ancestors, and of trying to gather the threads of their collective trauma into a finished weave of patterns for a generation that will someday hold the reins of history in their own hands, in a battered world but also perhaps one full of renewed possibility for change.