The Rain Barrel by Frank Ormsby 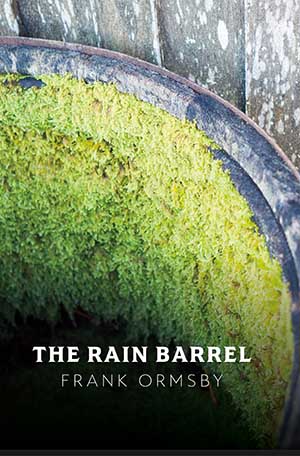 KEEN OBSERVATION is expected of a poet, and Irish poet Frank Ormsby satisfies many times over in The Rain Barrel. The book is filled with bright idylls such as “The Beekeeper” and “Small Things.” In “Small Things,” a pair of “old boys” try to cheer the speaker because he’s just missed seeing a heron: “They cast about for fitting consolation. / ‘Have you seen the egrets?’” they ask. But the speaker’s not disappointed: he finds “three pleasures” in their joy from “the small things made precious by their delight.” Of this type are poems describing the countryside of Northern Ireland and abroad, poems investigating butterflies and buckets, of cows and birds, and even head lice. Each of these image-full poems is a pretty figure in its own right, like a piece of beach glass, and in the same way, once the first treasure is revealed, the whole strand is suddenly populated with riches.

A book of well-crafted imagist poems would be sufficient, but The Rain Barrel is much more than a string of pretty baubles. There are poems of playful personification, such as “Scarecrow,” in which Ormsby imagines the family’s scarecrow pining for a “ragdoll / who won a prize for lady of the house” and who “lives in a cornfield further west.” As these character/objects multiply and reoccur throughout The Rain Barrel, they begin to weave a complex tapestry of a place and a family.

Ormsby demonstrates a subtle virtuosity in this book. In addition to the quieter, reflective poems in the short-line lyrical format, there are some common variations. The poem “Small World (4)” is a series of ten brief and independent stanzas. Each of them is a highly compressed combination of observation and sentiment. If one isn’t fussy about counting syllables, they are excellent examples of the haiku form. Take, for example, the eighth stanza, in its entirety: “The heron fluffs / his landing. A straight face / from every fowl on the lake.” Or, for a different form, consider “The Love Poem,” which begins by announcing that “the love poem has been discredited / . . . a day has been set aside for the shredding of the English love sonnet.” However, by the end of the piece, the love poem has been restored—“my prohibition love, / aroused, we will melt underground”—and improved: “It will be the old loving, toughened and tenderized by exile.” The poem is a pleasurable reversal, from cynicism to passion and seduction, but it’s also formally playful, ending, as does the English sonnet, with a rhyming couplet. Another example of formal variation is the eponymous poem, “The Rain Barrel,” which is composed of eighteen distinct observations. Together, they describe and personify an enormous old whiskey cask, which has become a family’s rain barrel. The poem’s turns of perception are reminiscent of Wallace Stevens’s play with blackbirds, though Ormsby’s poem is less abstract.

Unlike Stevens’s blackbirds, which are largely figurative and a locus for the hypothetical, Ormsby’s rain barrel is absolutely tangible. The sections’ variations make the object real, even if many ways of looking at the barrel reach deeply into fantasy and, in describing the arc of its existence, transform it into a reflection on the narrator’s father. Section 7 of the poem describes “two old warriors, the rain barrel and my father,” the former persisting in its simple mission, “the other struggling to accept the gifts of air.” By section 13, the barrel is a way of looking back at the father’s funeral—“so strong” does it look on that day, “it might be carrying / clay as well as water.” In other sections, the barrel—like the scarecrow, the hatchet, a kettle—is transformed by light and well-crafted personification into a character with its own secret life and romances, and even the massive cask must someday succumb to age. In this way, the objects in this book are a metonymy of the family, their farm, and in many ways the countryside’s transition from one way of life to another—fireplaces to stoves, wells to piped water—a region leaving the pastoral and entering the industrial world.

Cross-woven through the idylls and the object-poems are pieces that deal with the disappeared, a word that evokes some of the most brutal periods of the twentieth century. The first poem in the book hints at the conflict with its title: “Untroubled.” The poem is a reflection on a childhood and begins with childlike anachronistic vision: “Caesar is flattening Gaul / . . . My father has slept / with his mouth open / since the beginning of the war.” The poem goes on to describe the date, 1962, with “JFK smil[ing] from our mantelpiece.” Up to this point, the poem seems a wholesome recollection, and the mention of JFK recalls the enormous pride many Irish felt regarding the presidency of Kennedy, but the title evokes the Troubles, and the rest of the poem forecasts the fear and violence of that time. For example, “The Disappeared” is a haunting, sparse poem that speaks of mass graves hidden on the mountain, and just after comes “Today There Has Been Information,” one of many poems that deal with the search for bodies or, as the book develops, one body in particular. The family at the center of The Rain Barrel has lost a son to the Troubles, and there can be no closure for them without answers, without a funeral, as heartbreakingly detailed in poems such as “No Closure” and “There Will Be a Knock.”

The Rain Barrel is a substantial text at over a hundred pages of poetry, and this reviewer highly recommends it. It contains a wide range of subject and style, but Ormsby doesn’t lean on technical mastery to dazzle the reader. The poems often celebrate the quotidian marvels of life. Furthermore, in addition to all the kinds of pieces described thus far, there are also interspersed throughout the book those common ekphrastic pieces dedicated to other artists and poets. The final poem in this book, “After Fernando Pessoa,” is an example. It is also the best final word on Ormsby’s excellent collection. Here it is in its entirety:

Everything in the universe is beyond belief
but I reach out daily in the act of believing.
O my fugitive unbelief,
let my reaching out
be always
to what is beyond belief.