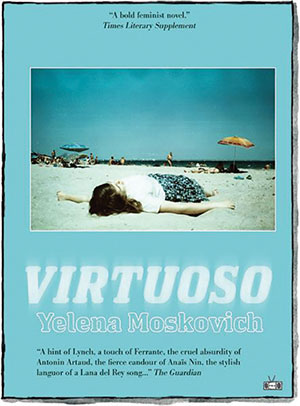 FIRST PUBLISHED IN 2019 in the UK, Yelena Moskovich’s Virtuoso has been rereleased for US audiences. A novel with surrealist overtones, much like Moskovich’s first novel, The Natashas (2016), Virtuoso is set bilaterally in Paris and Prague with a couple of unflattering US cities thrown in for good measure.

It is primarily a tale of lesbian friendships and romantic relationships, and Moskovich handles both deftly. Friends Jana and Zorka both grew up in communist Prague and share a forever bond. It may not be too far-fetched to say that the raven-haired, outrageous Zorka is the Freudian id to Jana’s prim and proper superego. Zorka’s rages and outbursts define this novel and steal the show despite a whole cast of other characters.

Later in the story, itching to get out of the newly liberated Prague of the 1990s, Jana immigrates to Paris, where she becomes a successful businesswoman albeit somewhat of a loner. Meanwhile, Zorka and her family leave for Milwaukee, Wisconsin, a disaster just waiting to happen. Moskovich’s prose is sometimes direct and gut-punching, such as when channeling Zorka and Dominique; while writing about the gentler Jana and Aimée, her prose is more lyrical and poetic. Aimée and Dominique, the main romantic female dyad in the story, live in Paris; the author showcases the highs and lows of their long-term relationship, spaced in between vignettes about Jana and Zorka. The storytelling jumps around a good bit chronologically, which can occasionally be confusing.

America comes out looking foolish in Virtuoso, especially in the separately spaced chapters depicting ongoing lesbian chat-room conversations between a serious Prague woman and a cheery, clueless American girl. Their attempts to communicate are hilarious, and the flippant American comes across as the prototypical Ugly American.

Despite the number of characters in the story, Virtuoso has very little plot. The text ambles along with the uneven vignettes, but not distractingly so, and is delivered in different first-person narration. The author’s inimitable style is both elegant and poetic. By story’s end, our characters’ lives amazingly, but not unbelievably, intertwine, skillfully arranged by Moskovich.

A native of the former Soviet Union, Yelena Moskovich immigrated to the US as a child. She studied theater in Boston and Paris. Her plays have been widely published and performed. Despite not being a native English speaker, Moskovich penned her two novels in impeccable, polished prose.