Here We Are by Graham Swift 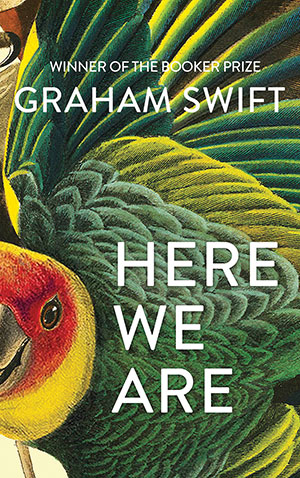 IN THE 1959 Brighton summer season, Ronnie Deane, or “The Great Pablo,” and his beautiful assistant and fiancée, Evie White, have become a sensation with their astonishing magic act. Their friend, Jack Robbins, or “Jack Robinson,” a song-and-dance man and compère extraordinaire, is already considering next year’s lineup. But instead of a September wedding, the relationship between this trio becomes increasingly complicated, eventually bringing the act as well as the wedding plans to an abrupt end.

Readers familiar with Swift’s work over the last forty years will recognize in Here We Are many of the leitmotifs found in his previous novels: the setting of a seaside town as well as London during the Blitz, as in Last Orders (1996); a story told from the perspective of a woman reflecting on her life and marriage, as in Tomorrow (2007); a plot that rests on the events of two days, nearly half a century apart, as in Waterland (1983); and the fraught parent-child relationship found in The Sweet-Shop Owner (1980), Shuttlecock (1981), and almost all Swift’s previous fiction. But Here We Are most closely resembles Swift’s recent novella, Mothering Sunday: A Romance (2016).

At fewer than two hundred pages and printed in large type, this slim volume can be read at a single sitting. Indeed, such a condensed form seems to be characteristic of Swift’s late career, and he shows himself, once again, a master of the genre. You might say Here We Are and Mothering Sunday are fictional siblings. In both works, Swift offers a midcentury portrait of the artist, where the protagonists (male and female, respectively) spend their childhood at a country estate (this time called Evergrene), have an apprenticeship in Oxfordshire, realize their vocation in an epiphanic moment, and find some fame along with professional success in their mature career.

Here We Are evokes an age gone by, a world that vanished with the popularity of television and the appearance of the Beatles. Part rural idyll, part 1950s show-biz romance, Here We Are may seem wistfully nostalgic, barely in touch with the terrorism, global economy, and digital dominance that characterize our current times. Through the lives of these three characters, however, Swift captures, in stunning prose, the often-sad truths about maturation, love, and friendship—themes still relevant today. And in the astonishing culmination of the novel, as in all good magic shows, Swift stage-manages a disappearing act—a literary sleight of hand—that makes the reader wonder, “How did he ever do that?”