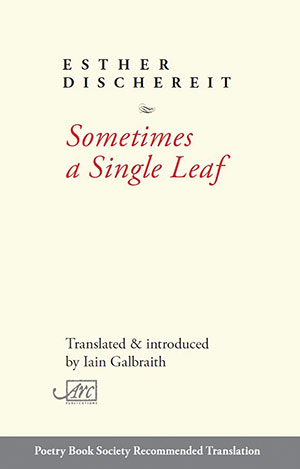 BORN IN GERMANY in 1952 to a Jewish mother who had survived the Holocaust in hiding, Esther Dischereit grew up in a haunted society, where the crimes of the recent past were effectively suppressed despite their omnipresent traces. These poems, drawn from published collections spanning the years 1996 to 2007 as well as from more recent work, give voice to disorientation and pain, as well as endurance and resolve, in the unwelcome work of calling history to account, of witnessing to the ghostly “once-weres,” invisible to her contemporaries. A fine preface by the translator Iain Galbraith provides biographical context and introduces rich avenues of interpretation. Galbraith’s translations render very compellingly the sparse lines and subtle rhythms of Dischereit’s free-verse poems.

“Time has no meaning / it has material,” Dischereit writes. Indeed, her poems give the collisions of past and present a striking, material quality, often figured as vestiges and residues, whether splinters (a term Galbraith discusses in his preface), shards, streaks, or dust. Many of her poems distill German Romantic nationalism into a single word or image—the moon, flowers, a lone tree, Beethoven, Snow White, a beer—and place them in fraught narrative sequences or effaced landscapes of horror such as Dachau, Plötzensee, or the Putlitz Bridge. Of particular power are her poems that stage complex human interactions. Sometimes vicious, sometimes loving, these encounters are often conveyed in an imagery of entanglement, where arms and legs are violently encircled and restrained; or the hands and hair—of mother and daughter?—are braided together. An excursion with a friend or a lover provides the occasion for a mutual weaving together—“I am weaving you in / and he wove me in”—and seems to stand as a rare moment of grace and an integrative ideal within this corpus.

The titular poem, “Sometimes a single leaf,” pays tribute to the fleeting, irreproducible flight of a leaf buffeted by the wind, which the poet tries and fails to pursue in a kind of dance. The poem thus lays bare the fragility, ephemerality, and irreplaceability of singular existence. But if reanimation or even reenactment are impossible, the final line, “As I recently told you,” allows for repetition in the telling. That seems the faithful task which Dischereit sets for herself as a poet who comes in history’s wake.