Driving in Cars with Homeless Men by Kate Wisel 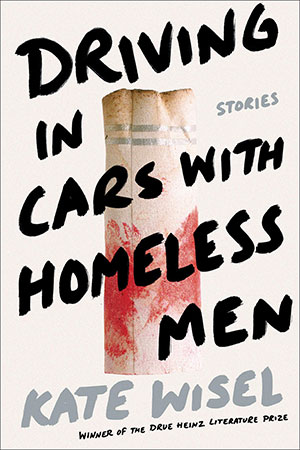 IN HER TOUR de force debut collection, Driving in Cars with Homeless Men, Kate Wisel weaves the stories of four women: Serena, Frankie, Raffa, and Natalya. Her protagonists, adrift yet assured, are fettered to one another by friendship, their ferocious hunger for human connection, their withstanding of abuse and its insidious violence, and their ever-present belief in possibility and redemption. Garbed in black jeans, black hoodies, and black-inked tattoos, they represent Boston’s working class, its disenfranchised, its drug-hazed denizens and misfits.

Wisel deftly shifts between points of view and writes with verve, incisive detail, and a poet’s attention to tempo and cadence. Narratively and chronologically, the temporal terrain of these twenty linked stories is perpetually shifting. The reader moves between their childhoods, their present-day lives, and their futures—sometimes in the span of just a few pages. Hers is an unflinching, laser-focused portrayal of violence and how relational violence informs the trajectory of one’s life—your friendships, intimacy, opportunities, and well-being.

Serena, her utterances the most pronounced in this chorus of female voices, becomes a victim of domestic and physical abuse at the hands of her boyfriend, Niko. In the story “Trouble,” Niko gives her a puppy (aptly named Trouble) as an apology
for giving her a shiner. For her part, Serena equates the puppy with her abuser and instinctively unleashes her fury at her canine companion, perpetuating the cycle of violence and reconciliation:

When he [Niko] picked Trouble out of the litter, I thought he’d stay that same size forever, the size of an organ, sticky-soft and warm. We took Trouble home. He trembled, then ripped up the sectional Niko had bought without insurance.

“Cut it out, you fucking monster!” I screamed.

In my spot, in the closet of the guest room, he fell asleep in my arms, where he had puppy dreams. His paws moved like levers in a field where he was free and unleashed.

By tracing these interiorities, Driving in Cars with Homeless Men invites readers to face the underbelly of human nature, our precariousness, and intermittent despair with determination, grit, and hard-won humor.