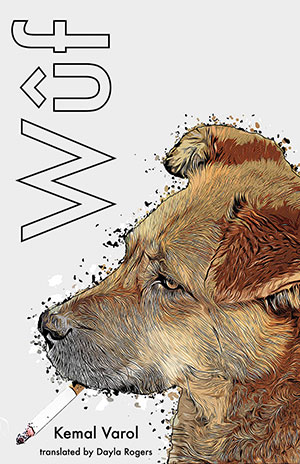 KEMAL VAROL is little known outside Turkey, where he is a minor star of contemporary literature. He is best known for the 2014 novel Haw, translated into English under the title Wȗf as part of the University of Texas’s Center for Middle Eastern Studies’ (CMES) book series Emerging Voices from the Middle East. In Turkey, the novel was awarded multiple prizes, including a journalism association’s peace prize, and was translated thanks to a prestigious PEN/Heim grant. The sixth book in the CMES series, Wȗf is the rare literary work from Turkey made available into English and proves its author to be as strong an emerging talent as Elif Shafak or Orhan Pamuk were upon their anglophone debuts.

Wȗf tells the story of Mikasa, a street dog who grows up amidst the conflict between “Northerners” and “Southerners” in the Turkey of the 1990s, falls in love with a dog who guards the Southerners’ party headquarters, is captured by the Northerners, trained to sniff out bombs, and after a disastrous incident is sent to recover in a vet shelter, where he becomes something of a legend among the impounded animals. Mikasa is passionate about those he loves (human and canine alike) and about cigarettes. Characters are drawn in the thin veneer of this literary style—the political allegory that strives not to be too partisan—but nonetheless come alive: the ruthless Lama, kind Canine Cengiz, sweet old Uncle Heves. Not surprising, given the human interest of the story, it’s the human characters and not the dogs (with Mikasa as the exception) who really come to life in Varol’s prose.

Wȗf is a love story of war and violence. Touted as surrealism thanks to its canine narrator, it is utterly realist in its depictions of the horrors of armed conflict, emphasizing the damage done to both soldier and civilian, psychologically and physically, in the name of political ideologies. While Varol speaks of “Northerners” and “Southerners” for the sake of plausible political deniability, Wȗf is quite obviously a novel about the Kurdish revolution against the Turkish state, focused on the period of particularly intense violence in the 1990s. Dayla Rogers has rendered all this in an excellent translation that brings Varol’s novel to life, and she provided a number of endnotes that help contextualize some of the more oblique historical references for those unfamiliar with the specificity of the conflict.

Kemal Varol’s Wȗf is an excellent contribution to the literary consideration of war’s many damages and will no doubt continue to be an important cultural referent for the Kurdish-Turkish conflict in the Turkish cultural imagination. I won’t be surprised to see it on 2020’s “best of” lists.