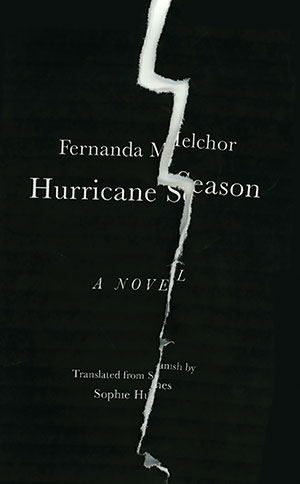 OF THE TWO EPIGRAPHS that appear at the beginning of Hurricane Season, the second is taken from Mexican author Jorge Ibargüengoitia’s novel The Dead Girls. It reads: “Some of the events described here are real. All of the characters are invented.” An apt forewarning that what the reader is about to discover is at best a fictionized account of reality.

A native of Veracruz, Mexican novelist Fernanda Melchor graduated from the Universidad Veracruzana with a degree in journalism, a craft she practiced before turning to fiction writing. Her first book, Aquí no es Miami (2013; This is not Miami), a collection of crónicas, served as a bridge between journalism and her first novel, Falsa liebre (2013; False hare). Hurricane Season (Temporada de huracanes in Spanish) is Melchor’s second novel. Published in 2017 by Literatura Random House, it represents a harmonious melding of journalism and fiction, absent the autofiction popular among many of her contemporaries. The trope that unites her work, both journalistic and fictional, which reaches its apex in this novel, is the violence—in particular femicide—of her native state of Veracruz. In 2019, of Mexico’s thirty-two states, Veracruz ranked seventh, registering 2,161 murders, a statistic that does not reflect the hundreds of forced disappearances that occur annually.

The novel’s story unfolds in the town of La Matosa, in the state of Veracruz. While the town gets its name, as Ignacio M. Sánchez Prado tell us, from an Angolan slave trader named Francisco de la Matosa, its linguistic similarity to mata (bush or plant—the word mata appears in the novel’s fourth line) and the verb matar (to kill) adds curious, if unintentional, layers of meaning. Structurally, the novel is divided into eight untitled chapters, each consisting of a single paragraph. The first chapter, which consists of little more than one page, introduces us to the “troop,” a ragtag group of five boys, “caked in mud up to their shins” (more about this later) that stumble upon the murdered body of the Witch. What follows is a raw, ribald, and riveting detective novel that unfolds in seven chapters. Instead of providing linearity, Melchor develops her story through polyphony, with each chapter representing the voice of a different character. In this way, the novel seems to lack narratological coherence. In its place, Melchor’s prose—careening sentences with shifting points of view that swerve in and out of registers and assault every sensibility—propels the reader forward, gaining ever-increasing momentum.

The translation of Hurricane Season would present a challenge to even the best translator. Sophie Hughes proved she was more than up to the task. Hughes deftly captures Melchor’s prose, in all its grit and grime, richness and complexity. Earlier, I referred to the troop of five boys “caked in mud up to their shins.” The Spanish here reads calzados en botines de fango (shod in ankle boots of mud). Hughes’s rendering here is a shining example of her originality at work. As a translator, I marvel at these kinds of inventive solutions—translation, after all, is about finding solutions—to sentences that, when translated literally, would be clumsy or foreign-sounding. Other examples of Hughes’s inventiveness are phrases like “swanned around town like an aristocrat when she was nothing but a slut” for se daba los grandes aires de señora pero no era más que una güila (she gave herself the grand airs of a lady, but she was nothing more than a slut). Also admirable is the naturalness and aplomb with which she renders the sexual epithets and graphic language that course through the novel.

Some lexical choices, however, left me perplexed. Hughes’s rendering of zonza (silly, stupid), one of the many epithets by which the Witch was known in La Matosa, as “retard” is a bit jarring. While I do not believe it the translator’s task to edit words they may find either infelicitous or offensive, there are many other options at Hughes’s disposal that would do the work that zonza is doing in the text. Moreover, Hughes’s decision to genericize the linguistically and culturally specific zopilotes (vulture or buzzard) to “birds of prey” was disappointing. Her decision to render suripanta (originally chorus girl, then by extension prostitute) as “hack” is one of the most confusing choices she makes.

That Hughes resists the temptation to leave la Bruja in the original, rendering it instead as the Witch, gives us an immediate glimpse into her interpretive perspective. While we learn on page 6 that the novel takes place in La Matosa, and that there are characters named Don Manolo and Señora Chucita, Maurilio, Yesenia, and Clarita, with the exception of a few place names, there are few linguistic clues that tell us that this novel was written in Spanish, much less that it is set in Mexico, which is all the more reason that a decision like leaving such epithets as papacito in Spanish stands out. Speakers of American English may find the decision to render futbolistas as “footballers” unpalatable.

Shortlisted for the 2020 International Booker Prize, Hurricane Season is a must-read. In view of the prize organizers’ recent decision to delay the announcement of a winner until late summer, there is ample opportunity to order a copy. I strongly encourage you to do yourself this favor.