The Beekeeper of Aleppo by Christy Lefteri 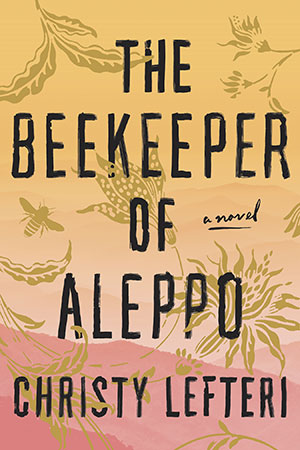 Originally published in Canada in 2016, The Beekeeper of Aleppo follows a couple fleeing the destruction of the Syrian war to Turkey and Greece as they journey toward their remaining family in Britain. Captivating from the very first page, the book couldn’t be more timely. A rich, gentle voice and beautiful imagery combine almost ironically with individual and systemic atrocities to convey the absolute devastation of war. The book has a dreamlike quality: certain sections are clear and concrete while others are more nebulous, and the plotline moves in time and space as a dream does, or as memories do for trauma victims.

The symbolism of bees in the book is masterful. Bees are socially dependent creatures that often represent the life and health of their ecosystem. Small and fragile yet tenacious beyond belief, they can easily be seen as kindred souls to Nuri and Afra, the main characters in the novel. When nothing remains for them in Aleppo, Nuri longs to be reunited with his cousin and apiary partner in Britain. His wife, Afra, has sustained almost more damage than one individual can survive. It would be cliché to simply say that they need each other to survive the journey to a new life; the book goes much further, into the angst and grief that surround them as they cling, alternately at times, to the bond that has been deeply forged by shared pain.

The author herself is the daughter of Cypriot refugees and brings a compassionate eye to the inter- and intrapersonal effects of loss and displacement. Lefteri has done more than tell the story of Syrian refugees; she has given flesh and blood to the many instances of political unrest that we see daily on our screens. Her studies in the field of psychotherapy and her work at a UNICEF center for refugees in Greece give her a deft hand and show a genuine heart. She has created an opportunity for readers to become more human in their understanding of current events and the acute suffering that accompanies them.