Honey, I Killed the Cats by Dorota Masłowska 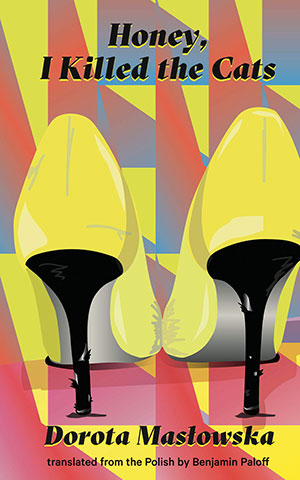 In her second novel translated into English, Dorota Masłowska sets her sights on societal decay under capitalism and consumer culture. Joanne and Farah are close friends who hit it off right away and spend their days going shopping and taking yoga classes in the New York-esque, near-future American city in which they live. But when Joanne meets and falls in love with a faucet salesman and aspiring Hungarianist, Farah becomes a third wheel before eventually being left behind. As their friendship disintegrates, the two women navigate the emotional hollowness of their times and attempt to grapple with their neuroses and hang-ups in a world that prizes aesthetics over all else.

At times, Masłowska is able to explore the psychological impact of living in the nightmarish hypercapitalist system she has created—a terrifying fun-house take on our own—with moving depth and precision. In one such passage, Joanne tries to express to her boyfriend the emptiness she feels in the face of her own mortality and the ways in which their physical relationship brings her as close to happiness as she can seem to get. In scenes like that, Masłowska is able to cut through the layers of vapidity that weigh down the rest of the prose.

Written in 2012, the novel’s almost flippant, deeply cynical tone calls to mind the excesses of the early 2000s more than the current relationship between consumer and society today. Rather than feeling connected to Farah and Joanne as well as the cast of supporting characters, they remain largely at arm’s length, defined predominantly by their shallowness. Despite moments of compelling reflection on the ways in which consumerism drives and exacerbates insecurity, isolation, and unhappiness, the book ultimately falls flat as commentary.