The Red Years: Forbidden Poems from Inside North Korea by Bandi 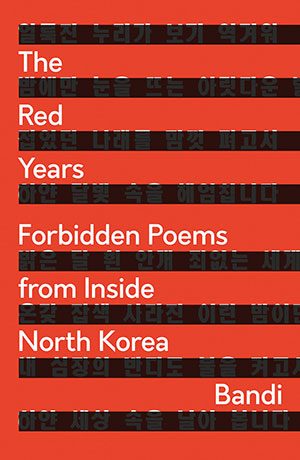 Translator Heinz Insu Fenkle writes in his introduction to Bandi’s The Red Years: “There are still numerous places where imprisonment, torture, and execution are things a writer must carefully consider.” Bandi, a North Korean writer and dissident, produces work that is truly urgent in a sense that it has terrifying ramifications for the safety of real people. Bandi, who could not escape himself, passed on his manuscript to a relative, who smuggled it out of North Korea. The first part of Bandi’s manuscript is seven short stories that were published in English as The Accusation and became an international success. This collection of poems is the second part.

There are fifty-one poems in five sections: “Barren Earth,” “Exhausted Heart,” “Longing for You, My Love,” “Attached to a Life,” and “Wishes.” The collection depicts the daily life of the North Korean people—an ode to young political prisoners; a tableau of scorched, traumatized earth; the performances of a child, a worker, a senior; and, finally, a slew of love poems in seemingly impossible circumstances. The first poem, “A New Arirang for the North,” is a rendition of a national folk song, “Arirang,” with lines adhering to its old rhythm while sharply veering into the risks of the present: “Arirang, Arirang, arariyo / . . . They put me in chains without a trial.” The collection begins with a familiar song, an invitation to seek what one knows to be true but is no longer certain. “Arirang” continues to ring throughout the collection, haunting lines with similar verses: “[Arirang, Arirang, arariyo] And set out to walk this hundred ri.” The collection’s musicality and repetition are both playful and horror-filled, recalling a childlike experience of folktales, folk songs, and those voices that jump out at the reader: “weep before me!”

The Red Years is a considerable achievement. The collection has the effect of coming across a stranger’s footsteps in the snow that vanish all too soon, leaving behind a deep-rooted grief for what was never resolved—a pain that can be more closely associated with the unrelenting sorrow of han. Despite everything, Bandi’s collection cracks open a merciless world and dares to show that what resides within it is the possibility of hope.